Underscoring that peace is more than just the absence of war, United Nations officials today stressed the need for concerted efforts to achieve the common vision of a life of dignity and well-being for all.

“We know that peace cannot be decreed solely through treaties – it must be nurtured through the dignity, rights and capacities of every man and woman,” Secretary-General Ban Ki-moon said in his remarks to the High-level Forum on the Culture of Peace, convened by the General Assembly. “It is a way of being, of interacting with others, of living on this planet.”

In September 1999, the Assembly adopted, by consensus, a resolution on the Declaration and Programme of Action on a Culture of Peace. Since then, it has met annually to discuss the issue, as well as how to advance this noble goal.

Mr. Ban said that peace means access to education, health and essential services – especially for girls and women; giving every young woman and man the chance to live as they choose; and developing sustainably and protecting the planet’s biodiversity.

“More than ever, it means living with others on the basis of tolerance, respect and mutual understanding,” he added.

“We are challenged today. We join forces here to promote a culture of peace, and yet all around us we see a spreading virus of war, of conflict, extremism, violence, hatred and terrorism.

“But I am convinced that our strongest arsenal in the face of these threats is not weapons or missiles or guns,” he stated. “It is our shared values … our common vision for peace, development and human rights … our universal aspiration for a meaningful culture of peace.”

Delivering remarks on behalf of Assembly President John Ashe, Vice-President Isabelle F. Picco said the desire for a culture of peace knows no boundaries and is inherent in the hearts of all people.

“It transcends gender, culture, religion, faith and belief, and unites the rich and poor, the old and young, East and West, North and South around a common desire.”

She added that the post-2015 development agenda that Member States are currently working on must be rooted in a culture of peace.

“Peace as an overarching theme must be woven throughout the goals and underpin the targets,” Ms. Picco stated. “And our new agenda must be backed by the political will, commitment, partnerships and financial support to help usher in a new era of peace on a global level.”

♦ Receive daily updates directly in your inbox - Subscribe here to a topic.
♦ Download the UN News app for your iOS or Android devices.
culture of peace 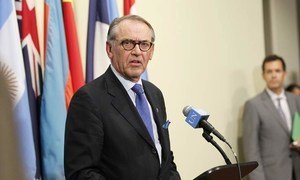