WHO/M. Seeger
Local construction workers at the Island Clinic, one of the five Ebola treatment centres with 100 beds that will be opened in Monrovia, Liberia.
4 September 2014

The United Nations World Health Organization (WHO) began a two-day meeting in Geneva to discuss potential Ebola therapies and vaccines in response to “intense public interest in, and demand for, anything that offers hope of definitive treatment.”

WHO also reported that as of 31 August, the official number of Ebola cases stood at 3,685 and deaths at 1,841 deaths in Guinea, Liberia and Sierra Leone. In Nigeria, there have been 21 cases and 7 deaths, and in Senegal, one case has been confirmed and there have been no Ebola deaths or further suspected cases.

Meanwhile, at UN Headquarters, the Security Council President for the month, United States Ambassador Samantha Power, said that that the Council had met with the troop and police contributing countries to the UN Mission in Liberia (UNMIL), the country “at the epicentre of the tragic Ebola outbreak in West Africa.”

The head of that Mission, Karin Landgren, joined by UNMIL’s force leadership, briefed on the many efforts being undertaken to protect and safeguard all UN personnel, notably the peacekeepers, serving “commendably to help Liberia consolidate its hard-won peace and security gains more than a decade since the end of that country's civil war,” the Security Council President said.

The UN Office for the Coordination for Humanitarian Affairs (OCHA), meanwhile, said that since April 2014, humanitarian partners have received $6.13 million from the UN Central Emergency Relief Fund (CERF) to respond to the ongoing Ebola outbreak in West Africa. An estimated $2.7 million has been allocated to Guinea, $1.9 million to Liberia and $1.5 million to Sierra Leone.

The West African Ebola outbreak is unprecedented in size, complexity and the strain it has imposed on health systems.

“There is intense public interest in, and demand for, anything that offers hope of definitive treatment. A range of unproven interventions-blood products, immune therapies, drugs and vaccines are under different stages of development but none have yet been licensed for standard use,” according to WHO.

In Geneva, WHO is bringing together today and tomorrow technical experts from the groups developing Ebola interventions along with people working to overcome Ebola virus disease including policy-makers from Ebola-affected countries, ethicists, clinicians, researchers, regulators and patient representatives.

They are expected to review and evaluate the state of development of interventions such as therapies and vaccines; agree the overall objectives for a plan for evaluation and use of potential interventions; identify and identify the most important actions that need to be taken; and establish what support is required.

The United Nations’ senior leadership on Ebola has said the Ebola outbreak in West Africa could be stopped in 6 to 9 months, but only if a “massive” global response is implemented.

Dr. David Nabarro, UN Coordinator for the Ebola Response, and WHO’s Assistant-Director General for Global Health Security, Keiji Fukuda, who had just returned from a needs assessment in the affected countries told reporters in Washington, D.C. this week that urgent needs include communications and messaging, care for the infected and proper burials, diagnosis and contact tracing, health services for other conditions, transport and supplies, cash to pay health workers, medical services for responders, air and sea access, and strong coordination to avert economic downturns. 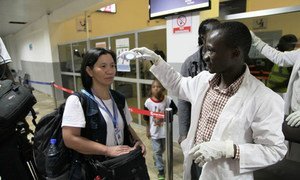 Ebola response must be based on 'scientific evidence, not on fear,' urge top UN officials

Misinformation about Ebola can only exacerbate an already fragile situation, said United Nations officials at the highest level today, urging international action and solidarity to help West African countries deal with the myriad health and socioeconomic impacts of current outbreak of the deadly virus.