IRIN/Tung X. Ngo
Climate-related disasters like flooding are on the rise.
3 September 2014

The commitments made at the international conference on partnering with small island developing states must be prioritized and implemented as soon as possible, urged the top United Nations official on disaster risk reduction.

“I think the challenge for all of us is how do we put a frame around this and make it understandable, call out the partners to the table, and get a commitment to constrict the focus,” said the Secretary-General's Special Representative for Disaster Risk Reduction.

Speaking to the UN News Centre from the sidelines of a partnerships forum on climate change and disaster risk management, Margareta Wahlström summarized discussions between islanders, donors, civil society and others partner groups. The thematic forum is one of six others at the Third International Small Island Developing State Conference in Samoa, which wraps up tomorrow.

The calls are for technical assistance, more and easier to access funding, wider replication of success stories and stronger partnership coordination, she noted.

Disaster risk reduction is prioritized in the conference's outcome document, a 124-point compilation known as the Samoa Pathway, which was, unusually, agreed upon before the conference started on Monday. The section on risk comes right after climate change and sustainable energy, and includes a wide range of general commitment – from technical assistance and financing for early warning systems, to harmonizing national and regional reporting systems.

“I think it would be an excellent idea if we as the United Nations could, based on this conference outcome document, establish a clear cut, not so complicated, plan of action for the small island developing states, and tailor it to the Pacific, Caribbean and the Indian Ocean,” the Special Envoy said.

“We need to build on what's already here. There are very strong institutions here in the Pacific, excellent technical competence, knowing the region. Because the UN can bring something very important here which is the linkages to the global agenda, added attention,” she noted.

Hundreds of partnerships have been announced throughout the week, and more than 300 are expected to be confirmed tomorrow at a total value of more than $1 billion, according to a senior UN official. Many of these are related to building resilience of islanders.

“People know what to do. The challenge is to put a timeframe to it, to measure impact, and to make sure that you set certain quality standards around the outcome so that you actually measure – does this have an impact on people or not? Does this actually help governments? And if not, take corrective action before it becomes deadweight,” Ms. Wahlström explained.

In the shorter term, the UN is likely to review its coordination and how it is structured in the Pacific which could open the door to greater financing, said the Special Envoy.

“If we really put our mind to it, we could be positioned differently within one year,” she summed.

Some of the greatest threats to the small island nations are environmental. Tropical cyclones and floods are among the most frequent cause of disasters in the Pacific region. Between 2001 and 2011, Pacific and Caribbean developing small islands were affected by at least 110 hazards, according to the UN International Strategy for Disaster Reduction (UNISDR) and the UN Office for Least Developed Countries, Landlocked Developing Countries and Small Island Developing States (UN-OHRLLS).

Given the high costs islanders pay for energy and transportation, and the countries' reliance on natural resources for jobs, the impact of such disasters is particularly destructive. In Jamaica, for examples, losses from tropical cyclones between 1991 and 2011 averaged about 2.6 per cent of its average annual investment, yet may have slowed the country's gross domestic product (GDP) by more than one point.

In addition, earthquakes and subsequent tsunamis also have potential to cause great damage, as occurred in 1998 in Papua New Guinea, the Solomon Islands in 2007, and in 2009 in Samoa.

The UN Framework Convention on Climate Change (UNFCCC) Executive Director Christiana Figueres is overseeing talks between Governments on a universally accepted climate treaty. UNFCCC is the parent treaty of the 1997 Kyoto Protocol. The final round of talks will be held in Paris next year. To build momentum for the talks, Secretary-General Ban Ki-moon will host his Climate Summit on 23 September.

“By March of next year, they [Member States] will be coming forward with their quantified contributions to the solutions, certainly on mitigation and some also on adaptation. The Secretary-General's summit has helped focus countries on this homework that they're all doing and we will begin to see some announcements that will preview what we will officialize by March,” Ms. Figueres told the UN News Centre.

In Samoa, she has been following the discussions, particularly from a renewable energy introduction perspective, as a growing number of island nations aspire for 100 per cent renewable energy.

“That prepares them much better for disaster because it is a fuel that is available to them that they don't have to depend to transferring in very difficult times,” Ms. Figueres said.

♦ Receive daily updates directly in your inbox - Subscribe here to a topic.
♦ Download the UN News app for your iOS or Android devices.
risk 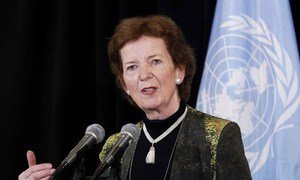