UNHCR/I. Zimova
A Ukrainian family with their belongings after arriving at Kyiv by train. They had fled the violence in eastern Ukraine.
2 September 2014

The number of displaced people in eastern Ukraine has risen dramatically in recent weeks due to the ongoing fighting in the country, the United Nations refugee agency (UNHCR) said today, warning of corresponding increases in the need for humanitarian aid for civilians in the region.

The agency estimates that the number of displaced people inside Ukraine has more than doubled during the past three weeks, and as of 1 September, that number stands at approximately 260,000, according to spokesperson Adrian Edwards, who addressed reporters in Geneva today.

At the same time, he stressed that those numbers might not be fully accurate, as many of them are staying with families and friends and have not registered with the authorities. Therefore, the actual number of persons displaced could be higher.

Eastern towns such as Donetsk, Luhansk and neighbouring towns are the more affected regions in the country, with almost 94 per cent of civilians displaced. Local authorities reported that some 10,000 people left Mariupol to Zaporizhzhia and Berdiansk and other locations, after the military activities of the anti-Government forces in Novoazovsk.

The ongoing shelling in the country has also caused lack of access to basic necessities, such as water and food. Those in Luhansk and other cities have, for instance, also been affected by electricity shortages and communication problems for a month.

The UN refugee agency reports severe damage to main infrastructure, including buildings and roads. This has inevitably limited deliveries of humanitarian aid to those in need.

He said that UNHCR was urging additional support and assistance to those who have been displaced. With the winter approaching, he underlined the need for extra help. The UN was also calling for special support for the Luhansk region, where citizens are still waiting for life-saving aid.

However, if the situations allows, UNHCR has plans to conduct a fact-finding mission later in the week, he added.

Alongside with other humanitarian partners, UNHCR is also distributing food provided by different foundations. 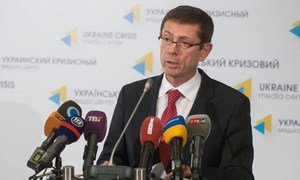 Intense fighting, including the use of heavy weaponry by both sides, in densely populated areas of eastern Ukraine, has increased the loss of civilian life, with an average of around 36 people being killed every day, says a new report issued today by the United Nations human rights office.