Over one million Somalis in danger as food crisis worsens, warns UN agency

FAO/Frank Nyakairu
A boy redirects a camel at Hargeisa Livestock Market in Somalia, a facility constructed by FAO with UK funding.
2 September 2014

Poor rains, conflict, trade disruptions and reduced humanitarian assistance have led to a worsening of the food security situation across Somalia, the United Nations warned today, adding that acute malnutrition increased in many areas, particularly among children.

The UN Food and Agriculture Organization (FAO) said in a news release that over one million people in the Horn of Africa nation face acute food insecurity, and the situation is likely to continue deteriorating further until the start of the Deyr rains in October.

The latest findings from a joint assessment indicate that an estimated 1,025,000 people will be in crisis – a 20 per cent increase since January of this year. These people will require urgent humanitarian assistance and livelihood support between now and December 2014 to help meet immediate food needs.

Recent nutrition survey results conducted across the country also indicate that an estimated 218,000 children under the age of five are acutely malnourished (nearly one in seven children under five) – a seven per cent increase since January 2014.

This figure includes 43,800 severely malnourished children who face an even higher risk of morbidity and death, FAO noted. Critical levels of acute malnutrition were found in 21 out of 50 population groups surveyed.

The agency said morbidity, poor infant and young child feeding practices, and inadequate humanitarian assistance are among the main contributing factors of malnutrition in Somalia.

As a result of delayed and erratic rainfall, the Gu 2014 cereal harvest in July/August is estimated to be 37 per cent below the long-term average and 28 per cent below the five-year average. The poor rains have also contributed to water shortages, poor livestock performance and reduced access to milk in several pastoral areas.

In these areas, access roads remain under insurgent control and trade flow is largely blocked, resulting in sharp increases in staple food prices. Cereal prices, FAO pointed out, have quadrupled in Wajid (Bakool) and doubled in Hudur town (Bakool), Middle Shabelle and Hiraan (Buloburte district) regions between January and July/August 2014. 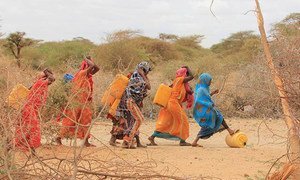 A United Nations human rights expert today urged the international community to “act now” to avert a humanitarian disaster in Somalia, where a widening hunger crisis has sparked fears of a repeat of the 2011 famine that devastated the war-ravaged country.