UN DPI/NGO
Mr. Maher Nasser, the Acting Head of UN DPI with the planning team of the conference at the last conference planning meeting.
27 August 2014

Civil society converged on United Nations Headquarters in New York today to make their voices heard regarding the future global development agenda that will point the way forward on a range of issues such as eradicating poverty, eliminating hunger and combating disease.

The 65th Annual UN Conference for Non-Governmental Organizations, on the theme “2015 and Beyond: Our Action Agenda,” brings together an unprecedented number of civil society members to discuss the way forward after the deadline for achieving the set of anti-poverty targets known as the Millennium Development Goals (MDGs).

“All of you are raising your voices for our common values. I’m deeply encouraged by this unprecedented show of interest,” Secretary-General Ban Ki-moon told the opening session in a video message.

“I depend on NGOs to push world leaders along the right path. You understand that sovereignty carries responsibility. You know that political power is a sacred duty. And you have grassroots influence that can make history.”

He said that the UN is now poised to make “monumental decisions for our world,” noting that the MDGs have achieved unprecedented success, lifting more families out of poverty, putting more children in school and preventing more disease than any campaign ever.

“I thank you for contributing to these results. I call on you to intensify progress. And I count on you to help shape a new vision for sustainable development.”

In particular, the conference – a joint effort between the UN Department of Public Information and the Executive Committee of NGOs associated with DPI – will focus on the following areas: poverty eradication; sustainability; climate justice; human rights; and partnerships and accountability frameworks.

Susana Malcorra, Chef de Cabinet in the Executive Office of the Secretary-General, told the gathering that the conference is both crucial and timely as it comes while Member States are negotiating the post-2015 development agenda.

“That new agenda will point the way forward on some of the biggest issues of our time, from eradicating poverty, eliminating hunger and combating disease to empowering women and girls, boosting health care, improving education, strengthening institutions, promoting rights, transforming economies, protecting the environment and tackling unsustainable production and consumption practices.

“Across this spectrum of opportunity and challenge, civil society needs to be heard more than ever before,” she stressed. “No discussion or negotiation of a post-2015 development agenda will succeed without your voices and input.”

This year’s conference is also timely, as it comes less than a month before the Secretary-General’s Climate Summit, slated for 23 September, and the start of the General Debate of the 69th General Assembly one day later, when world leaders will gather to discuss, among other world priorities, the post-2015 development agenda.

“We are indeed gathered here at a critical time in the post-2015 process as the international community strives to achieve the Millennium Development Goals while formulating the post-2015 development agenda,” said the Acting Head of the Department of Public Information, Maher Nasser.

He added that 2015, which also marks the 70th anniversary since the establishment of the UN, is recognized as a once-in-a-generation opportunity for global action.

“DPI is co-hosting this conference because of the tremendous importance that the UN attaches to civil society,” said Mr. Nasser. “We are committed to working with our NGO partners to ensure their voices are part of the conversation around all major global issues.”

♦ Receive daily updates directly in your inbox - Subscribe here to a topic.
♦ Download the UN News app for your iOS or Android devices.
non-governmental+organizations 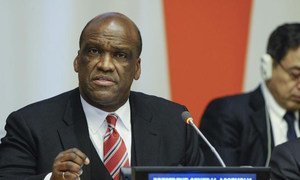 Equality, inclusiveness and participation must guide the framing of the world agenda for sustainable development, the President of the General Assembly said today, urging Member States to ensure that women, young people and civil society participate fully.