UNICEF Guinea
UNICEF and Partners take to the streets of Conakry, the capital of Guinea, to provide information on how to combat the Ebola outbreak as well as distribute soap and chlorine.
19 August 2014

While the trends of the outbreak of Ebola in Nigeria and Guinea, where the virus made its first appearance in West Africa last December, have shown encouraging signs, the United Nations health agency today expressed concern about the situation in the Liberian capital of Monrovia.

Meanwhile, the UN World Health Organization (WHO) reported that as of August 16, the total number of Ebola cases was 2,240 with 1,229 deaths in Guinea, Liberia, Sierra Leone and Nigeria.

The UN System Senior Coordinator on Ebola Virus Disease (EVD) Dr. David Nabarro told reporters this afternoon at UN Headquarters that he and Dr. Keiji Fukuda, WHO Assistant Director-General for Health Security, would be heading to the Ebola-affected region this week after first visiting Washington, D.C., to establish how best the United Nations can support affected communities in West Africa and enable health workers to their jobs.

Dr. Nabarro said he will be travelling to Liberia, Sierra Leone, Guinea and Nigeria in that order with a stopover in Senegal at the beginning and end of the trip.

In addition to supporting the health sector to avoid, cope and prevent further transmission, he noted that the current Ebola outbreak has humanitarian and political and potentially a security impact, requiring “a really comprehensive support” from the UN system.

When asked about the stigma recovering patients face, he said it is “not appropriate that people should be shunned this way.”

“Making sure people have the best possible information is our duty and the duty of all people who work at the United Nations. I think it is vital that all of us use all of our powers to share what we believe is the truth. It is only when people have that information and trust that it is correct will they feel comfortable in being able to tackle this disease.”

“This outbreak has major societal and economic consequences that will be felt for years,” he said, emphasizing that Governments should seek support in a way that empowers them to deal not just with this outbreak but future outbreaks.

“It’s good to be prepared. The reality is that when these threats happen we always say why don’t we invest in preparedness, but when they go away we put our attention to other things. Preparedness for infectious diseases really matters in our world,” he stressed.

“We’ve got to go on learning because often the thing around the corner is much nastier that what we have just dealt with,” he said.

In its latest assessment, WHO said at present, no cases have been confirmed anywhere else in the world outside the four affected countries – Guinea, Sierra Leone, Liberia and Nigeria.

“The situation in Lagos, Nigeria, where the first imported case was detected in July, looks reassuring,” WHO said. “At present, the city’s 12 confirmed cases are all part of a single chain of transmission” and so far, no cases have been identified outside that chain and the 21-day incubation period has lapsed.

“The full recovery to date of one infected contact is additional good news,” it said. “It counters the widespread perception that infection with the Ebola virus is invariably a death sentence.”

WHO also reported that the outbreak in Guinea is less alarming than in Liberia and Sierra Leone.

Public awareness of the facts about Ebola is higher there than in the other affected countries and innovative solutions are being found, the agency said. “For example, respected community leaders have been used to secure the cooperation of 26 villages that were highly resistant to outside help,” it said.

“However, the outbreak is not under control.” It said and cautioned recent experience shows, progress is fragile, with a real risk that the outbreak could experience another flare-up. A case in a previously unaffected area was reported last week, indicating continuing spread to new areas.

WHO Spokeswoman Fadéla Chaib told a press briefing in Geneva earlier today that the UN health agency was working with the United Nations, especially with the World Food Programme, to ensure people in the quarantine zones received regular food, aid and other non-medical supplies. Quarantine zones have been set up in areas of high transmission, including severely affected cities such as Guékédou in Guinea, Kenema and Kailahun in Sierra Leone and Foya in Liberia.

Ms. Chaib said that WHO was encouraging countries to scale up their response to the Ebola outbreak; it was requesting them to help with medical teams, equipment and financial resources, and had made an appeal for more than $100 million of which about 70 per cent was funded to date.

Communities in Liberia are being encouraged to set up temporary facilities in schools and other places in order to provide care for people who might be infected with Ebola and so avoid infecting their families, prior to the move of Ebola patients to specialized clinics, she said.

WHO also used the occasion of World Humanitarian Day today to draw attention to the threats and harassment of health workers in West African countries have also been a worrying element of the Ebola outbreak. These professionals are taking personal risks to provide critical medical care, but have been threatened, shunned and stigmatized.

“Doctors, nurses and other health workers must be allowed to carry out their life-saving humanitarian work free of threat of violence and insecurity,” said WHO Director-General Dr Margaret Chan. 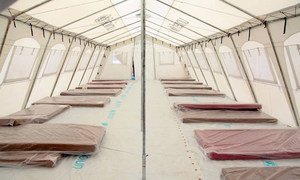 The United Nations World Health Organization (WHO) today said any persons with an illness consistent with Ebola should not be allowed to travel by air, sea or land from affected countries unless it is part of a medical evacuation, as it also expressed concern over the threats and harassment of health workers in West African countries developing into a “worry element.”