Expressing its “gravest concern” that parts of Iraq and Syria are now under the control of the Islamic State in Iraq and the Levant (ISIL) and Al-Nusra Front, the United Nations Security Council today placed six individuals affiliated with the terrorist groups on its Al-Qaida sanctions list and threatened measures against those who finance, recruit or supply weapons to them.

As the militants, particularly ISIL, have over the past two months, carried out deadly attacks in Iraq and Syria, the Council unanimously adopted a United Kingdom-led resolution noting grave concern at “the negative impact of their violent extremist ideology and actions on the stability of the region, the devastating humanitarian impact on the civilian populations and the role of these groups in fomenting sectarian tensions.”

Ongoing turmoil in northern Iraq has led the UN to designate its highest level emergency – “Level 3” – for the resultant humanitarian crisis, citing the scale and complexity of the situation, which is impacting tens of thousands of people that have been forcefully displaced by the armed group, Islamic State.

In its resolution, the Security Council deplored and condemned in the strongest terms “the terrorist acts of ISIL and its violent extremist ideology, and its continued gross, systematic and widespread abuses of human rights and violations of international humanitarian law.”

The Council, observing that that ISIL is “a splinter group” of Al-Qaida, recalled that ISIL and Al-Nusra Front are included on the Al-Qaida sanctions list and, as such, expressed readiness to consider listing individuals, groups, undertakings and entities providing support to ISIL or to Al-Nusra Front, “including those who are financing, arming, planning or recruiting for [those groups] and all [Al-Qaida associates] through information and communications technologies including the internet and social media or through any other means.”

Demanding that ISIL, Al-Nusra Front and all other individuals and groups associated with Al-Qaida cease all violence and terrorist acts and disband, the Council called on all UN Members States to take national measures to “supress the flow of foreign terrorist fighters,” bring them to justice and engage with those at risk of being recruited to discourage travel to Syria and Iraq.

It also reaffirmed that States shall prevent the direct or indirect supply sale or transfer to ISIL and Al-Nusra and associated individuals and groups, of arms and related materials. The Council also notes with concern that oilfields and related infrastructure controlled by ISIL and Al-Nusra are generating income which support their recruitment efforts and strengthen their operational capability to organise and carry out terrorist attacks.

Recalling that the asset freeze, travel ban and arms embargo requirements in paragraph 1 of its resolution 2161 (2014) apply to ISIL, Al-Nusra Front, and all other individuals, groups, undertakings, and entities associated with Al-Qaida, the Council directed the team tasked with monitoring violations of those sanctions to report “within 90 days on the threat, including to the region, posed by [ISIL and Al-Nusra], their sources of arms, funding, recruitment and demographics, and recommendations for additional action to address the threat.”

Annexed to the Council's resolution are the names of the six individuals added to the Al-Qaida sanctions list. 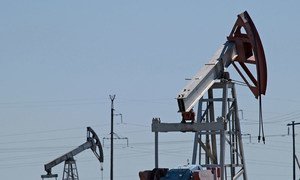 Voicing grave concern over the reported access to and seizure of oilfields and pipelines in Syria and Iraq by the Islamic State in Iraq and the Levant (ISIL) and Jabhat Al-Nusra, the Security Council today underscored that there should be no trade in oil with these terrorist groups.