UNHCR/Iva Zimova
Local volunteers prepare humanitarian aid in the cellar of the Sloviansk public library, Ukraine, which serves as a warehouse and collection point for UNHCR's aid delivery.
8 August 2014

Briefing the Security Council by videoconfernce, Ivan Šimonović, Assistant Secretary-General for Human Rights, expressed concern over the “rapid professionalization of armed groups, which are increasingly well-organized and equipped with heavy weaponry.”

“Fighting in and around population centres has resulted in heavy loss of life and very significant damage to property and civilian infrastructure. Both sides must be reminded of the imperative that they act proportionately and take precautions to avoid deaths and injury of civilians: otherwise,” he warned.

The human rights situation has deteriorated significantly in pockets of territory in Luhansk and Donetsk, which are controlled by armed groups and where the Government has been undertaking its security operations.

Later in the day, Secretary-General Ban Ki-moon, in a statement issued by his spokesperson in New York, expressed deep concern about the deteriorating humanitarian situation in parts of eastern Ukraine.

“Innocent civilians trapped in the fighting continue to lose their lives. The number of those who are fleeing the area continues to grow. Restoring vital infrastructure, not least for water and sanitation, is essential for a return to normal life,” said the statement.

According to the statement, Mr. Ban will continue to actively and closely follow the situation. If there is further deterioration of the humanitarian situation, or if nationally-led response efforts are not sufficient to meet humanitarian needs, the UN is ready to consider additional measures of support. At this stage, the situation is being handled appropriately by the Government of Ukraine, in coordination with international partners.

“The Secretary-General appeals to all parties to redouble their efforts toward achieving a lasting and peaceful political solution to the conflict in Eastern Ukraine. This is the most effective way to save lives and avoid a humanitarian crisis,” the statement concludes.

According to the UN Human Rights Monitoring Mission and the World Health Organization (WHO) since mid-April, more than 1,543 people have been killed in the east, including civilians, the military and members of the armed groups. Some 4,396 have been confirmed wounded but the real number is likely to be much higher.

“The fabric of society is being torn apart by the continuous and ongoing violence and fighting; the misinformation being spread is building divisive narratives, hardening people’s resolve and deepening social divides,” warned Mr. Šimonović.

In the Crimea region, harassment and discrimination has intensified against Ukrainian nationals, Crimean Tatars, religious minorities, and activists who opposed the 16 March “referendum”. The UN refugee agency (UNHCR) estimates that more than 15,200 people have left Crimea, while tens of thousands of people continue to flee the fighting in the east. The total number of internally displaced persons in Ukraine stands at over 117,910.

Freedoms of expression, association, peaceful assembly, movement and religion, have also taken a toll, he continued. In the east, these rights have been strictly curtailed by the armed groups.

Worrying trends show the rise of hate speech, particularly in social media, and a number of incidents targeting Russian-owned banks and businesses on the grounds that they are allegedly ”financing terrorism.” Journalists have also come under attack, especially in the east, where attempts at media manipulation have been especially egregious, said Mr. Šimonović.

He said he was particularly worried about children who remain in harm’s way. According to Ukrainian authorities, some 300 children are still in orphanages in the areas under the control of armed groups. Residents in the east affected by the prolonged may need psychological assistance to heal and rebuild their lives, particularly children. Many others will require help to recover, such as victims of torture and former hostages, especially those held for long periods.

He called for a multi-year human rights action plan for Ukraine based on the recommendations of the UN human rights mechanisms and the work of the Human Rights Monitoring Mission. The Government will need to address wider systemic problems, such as corruption, facing the country with respect to good governance, the rule of law and human rights.

“We cannot afford to wait a day longer, when at least 50 people are being killed or wounded every day. The price being paid by all Ukrainians as a result of the conflict is too high,” he added.

As for the shooting down of Malaysian Airlines flight MH17, which killed 298 people on 17 July, he said that while the downing of the aircraft may constitute a war crime, a thorough, effective, independent and impartial investigation is needed to determine the facts and circumstances of this act.

“This investigation is now underway, led by the Netherlands,” he said, underscoring in that regard that it is disturbing to learn that the volatile security situation at the crash site continues to hamper the investigators, despite the ceasefire zone declared by the Government of Ukraine around the area.

“It is urgent to stop the fighting and to secure the crash site,” declared Mr. Šimonović, adding that at the same time of course, there needs to be accountability for those responsible for war crimes, serious violations of international humanitarian law and gross violations of human rights law, as documented by the findings of the UN Monitoring Mission. 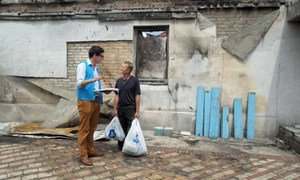