The United Nations health agency today appealed for urgently needed contributions to combat the deadly Ebola disease in West Africa, saying hundreds of doctors, nurses, health staff and materials are needed in the region “as fast as possible.”

World Health Organization (WHO) spokesperson Gregory Hartl said that this week is all about putting into practice the emergency response agreed upon by the head of the UN health agency and the presidents of the three affected West African countries – Guinea, Liberia, and Sierra Leone – in a meeting that lasted more than five hours last Friday.

Mr. Hartl said WHO Director-General Margaret Chan and the three West African leaders agreed on an Ebola disease response plan involving three co-centric rings in the most-affected areas along their common border, such as Kenema, Lofa and Kailahun.

“They want to institute emergency measures to encourage people to stay in those areas and not leave in order not to spread the disease to other areas,” Mr. Hartl told UN Radio, and to do that, they will increase supplies of food and other benefits into that area so it is attractive for people to stay there.

He said that is why WHO and the three countries have launched an appeal for a $100 million response plan.

“We need many more contributions from the international community, from governments, from NGOs, academic institutions, from anyone who can provide us with doctors, nurses, health staff, and other public health staff,” Mr. Hartl said.

“We need materials. We need money, and this we need quickly and we need a lot of it,” he said. “We are looking at hundreds of international staff that we would like to get into region as fast as possible.”

Dr. Chan had given a bleak assessment of the Ebola outbreak in remarks to the West African leaders last Friday, saying they are confronted with “an unprecedented outbreak” of the deadly Ebola disease accompanied by “unprecedented challenges” as the outbreak was moving faster than efforts to control it.

But she also told presidents of countries affected by the most lethal strain of the virus that “when well-managed, an Ebola outbreak can be stopped.”

The WHO chief also announced that on 6-7 August, WHO will convene an Emergency Committee meeting in order to ascertain whether the ongoing Ebola outbreak in West Africa constitutes a “public health emergency of international concern” (PHEIC) and, if it does, to recommend appropriate temporary measures to reduce international spread.

According to WHO, Ebola, formerly known as Ebola hemorrhagic fever, affects humans and nonhuman primates (monkeys, gorillas, and chimpanzees). The origin of the virus is unknown, but fruit bats are considered the likely host.

“Once a person comes into contact with an animal that has Ebola, it can spread within the community from human-to-human. Infection occurs from direct contact (through broken skin or mucous membranes) with the blood, or other bodily fluids or secretions (stool, urine, saliva, semen) of infected people,” according to WHO.

Sudden onset of fever, intense weakness, muscle pain, headache and sore throat are typical signs and symptoms. This is followed by vomiting, diarrhoea, rash, impaired kidney and liver function, and in some cases, both internal and external bleeding. 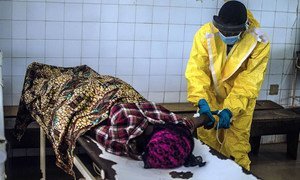 West Africa is confronted with a “fast-moving…unprecedented outbreak” of the deadly Ebola disease accompanied by “unprecedented challenges,” but the head of the United Nations health agency today told Presidents of countries affected by the most lethal strain of the virus that “when well-managed, an Ebola outbreak can be stopped.”