30 July 2014
As another United Nations school serving as a shelter for Palestinians in Gaza was hit by shells this morning, killing children, senior UN officials strongly condemned the attacks and warned against the targeting of civilians.

“Nothing is more shameful than attacking sleeping children,” Secretary-General Ban Ki-moon said immediately upon his arrival in San Jose, Costa Rica, for an official visit.

“I condemn this attack in the strongest possible terms. It is outrageous. It is unjustifiable. And it demands accountability and justice,” he added.

The UN Relief and Works Agency for Palestine Refugees in the Near East (UNRWA) Commissioner General, Pierre Krähenbühl, echoed the condemnation calling the attack “an affront to all of us; a source of universal shame.”

According to an initial assessment, Israeli artillery on at least three occasions hit an UNRWA school where 3,300 people were seeking refuge. While the agency says it is too early to provide a death toll, there are at least 16 civilians believed to be dead, and several, including to women and children, and to UNRWA guards trying to protect the site.

“The precise location of the Jabalia Elementary Girls School and the fact that it was housing thousands of internally displaced people was communicated to the Israeli army seventeen times, to ensure its protection,” Mr. Krähenbühl said, “the last being at ten to nine last night, just hours before the fatal shelling.”

“I call on the international community to take deliberate international political action to put an immediate end to the continuing carnage,” he underscored.

Meanwhile in New York, speaking to reporters, Deputy Secretary-General Jan Eliasson urged those involved in the conflict to “put people first” and see the high price civilians are paying and the horror of what is happening.

“To me, this is a moment when you really have to say 'enough is enough',” he declared. “You have to search for the right words to convince those who have the power to stop this.”

At least six UN staff members have been killed in Gaza since the latest conflict started, the Deputy UN chief said, visibly frustrated with reported criticism that the world body is not doing enough to stem the violence in the enclave. Since the start of the conflict more than 133 schools have been shelled or suffered collateral damage.

He said UN legal advisors are discussing with Palestinian representatives an official request by President Mahmoud Abbas to place Palestine under an international protection system administered by the UN.

Calling it a “sign of desperation,” Mr. Eliasson admitted that such a task is “not easy to think about” but noted UN involvement in East Timor and Kosovo as potential examples.

In addition to condemning the artillery attacks from Israel, he noted the rockets into Israel and the attacks orchestrated through the tunnel networks.

Yesterday, UNRWA condemned the finding of more rockets in one of its schools, and announced an investigation.

Speaking to journalists alongside Mr. Eliasson, John Ging, Operations Director at the Office for the Coordination of Humanitarian Affairs (OCHA), clarified that the rockets found were in schools abandoned by the UN due to the intensity of the conflict in those areas, and thanks to the due diligence and the investigative approach taken by the UN.

“When they are in control of the school they can [be assured] that it is free of weapons and no one with arms is allowed in the school,” Mr. Ging said.

Both militants and the Israeli Defense Forces had occupied those schools in the past, he added, “we deplore that but we cannot control” the schools when the UN is not physically present in the building.

On Tuesday, a compound housing the Office of the UN Special Coordinator for the Middle East Peace Process (UNSCO) and the Office for the Coordination of Humanitarian Affairs (OCHA) was hit five times over a period of one hour, according to UN sources.

A preliminary investigation shows that there were also two projectiles that hit the ground just outside the compound. One of which is believed to have hit Gaza's sole power plant. Pending a more formal investigation to ascertain the responsibilities for the shelling of its compound, UNSCO reminded the relevant parties to the conflict of their responsibility to protect UN operations.

The Special Coordinator, Robert Serry, “is deeply concerned about this incident and other violations of United Nations premises during the conflict and condemns the loss of civilian lives, including United Nations personnel.”

Of the quarter million people displaced in Gaza, an estimated 204,000 are in 82 schools serving as UNRWA shelters, according to OCHA, the equivalent of 10 per cent of Gaza's population.

“Our capacity is stretched to the limit,” said Valerie Amos, Under-Secretary-General for Humanitarian Affairs and Emergency Relief Coordinator.

A humanitarian emergency is ongoing in the Gaza Strip. More than 1,000 Palestinians have been killed, mostly civilians. Many more have been injured. Over 200,000 are displaced. The violence must stop. Recovery must start. Credit: OCHAoPt

The UN World Food Programme (WFP) is providing emergency food assistance to 204,000 people, in addition to the regular food programmes, and shortages in the markets are reported.

“Given the deteriorating humanitarian situation, peoples' needs will continue to grow,” Ms. Amos said, echoing calls for a ceasefire that would end the conflict. “Let's put people first.”

In today's press conference, Mr. Ging added that Gazans are gripped by “mortal fear” and are caught up in a “traumatic drama.”

“They are being told to flee areas, get out of areas, but to where? Where should they flee? In the end, we don't have the answer for them,” he said, adding that unlike in conflicts in other parts of the world, they population does not have an option of crossing borders.

He also reiterated the humanitarian challenges to providing aid, given that over 70 per cent of the people in Gaza are in need of steady assistance. Among the top priorities are shelter, food and water, and sanitation.

“Schools should not be targeted nor should weapons be stored in them,” he added. “We must protect these places of learning.”

Leila Zerrougui, Special Representative of the Secretary-General for Children and Armed Conflict, said in her condemnation that the situation is particularly worrying given the damage done to health facilities, which puts an additional strain on already limited resources to care for sick and injured children.

“Rockets fired into Israel by Hamas have injured children and damaged schools. Israeli children also deserve to live in peace,” she added. 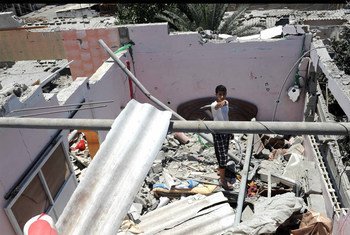 29 July 2014
Secretary-General Ban Ki-moon has strongly urged all sides to avoid any further escalation in the Gaza conflict, warning of the devastating humanitarian impact on civilians in the enclave who have already suffered immensely since the crisis started.