UN Photo/Mark Garten
Secretary-General Ban Ki-moon speaks to journalists at the Security Council stakeout on the situation in Gaza, in July 2014.
28 July 2014

Urging Israelis and Palestinians to stop the fighting now, “in the name of humanity”, United Nations Secretary-General has again joined the Security Council in calling on the parties to agree on an “immediate and unconditional” ceasefire, allowing for the delivery of urgently needed humanitarian assistance to the Gaza Strip.

“Gaza is in a critical condition. Israeli missiles have pummelled Gaza. Hamas rockets have randomly struck Israel,” said Mr. Ban, briefing the press today at Headquarters on his return from a six-day mission to the region, where he pressed both sides to heed the rising humanitarian toll of the crisis, stop the fighting and return to a comprehensive dialogue that would address and prevent the seemingly endless cycle of violence.

While stressing that no country would accept the threat of rockets from above and tunnels from below, The Secretary-General said that at the same time, “all occupying powers have an international legal obligation to protect civilians.”

“I was deeply disappointed that dangerous hostilities resumed on Sunday – but since Sunday evening a relative and very fragile calm on the ground has been established, said the UN chief, adding that while the temporary weekend pause in fighting brought a “brief respite” to war-weary civilians, it had also revealed “how much the massive Israeli assault has devastated the lives of the people of Gaza.”

Telling reporters that people on the ground have described the breadth of the destruction – which has reduced entire neighbourhoods to rubble and flattened apartment buildings throughout the tiny enclave – as a “man-made hurricane, Mr. Ban said: “The people of Gaza have nowhere to run. Every home, every school, every refuge has become a target.”

The casualties and massive damage also raise serious questions of proportionality, continued the Secretary-General, adding that as of now, more than 173,000 Gazans – nearly 10 per cent of the population – are seeking protection at facilities managed by the UN Relief and Works Agency for Palestine Refugees in the Near East (UNRWA).

“I repeat my call on Israel and all the parties to do vastly more to ensure the safety of these UN sites and the security of the people who have sought sanctuary there,” he said.

Mr. Ban’s comments to the press came hours after an early morning emergency session of the UN Security Council, which also called for an immediate ceasefire.

In a presidential statement approved just after midnight, the 15-member body expressed strong support for the calls by international partners and the Secretary-General for such a ceasefire, and urged all parties to accept and fully implement it into the Eid period marking the end of the Muslim fasting month of Ramadan and beyond.

“The Security Council also calls on parties to engage in efforts to achieve a durable and fully respected ceasefire, based on the Egyptian initiative,” the statement added.

In this regard, the Council welcomed the efforts of international partners and the convening of the international meeting to support the ceasefire held in Paris on 26 July and urged all concerned regional and international parties to vigorously support efforts to consolidate an agreement between the parties.

The Israeli military offensive in Gaza, which is home to 1.8 million people, has left hundreds dead and thousands injured. Over 170,000 people have been uprooted from their homes and have sought shelter in UN-run facilities.

The Council expressed “grave concern” regarding the deterioration in the situation as a result of the crisis related to Gaza and the loss of civilian lives and casualties.

In a statement issued earlier by his spokesperson, Mr. Ban welcomed the Security Council’s “strong support” for his call for a humanitarian ceasefire.

He called on all parties to prolong the suspension of fighting for an additional extendable period of 24-hours to allow vital humanitarian efforts to continue, and reiterated his demand for a durable ceasefire that could set the ground for the start of comprehensive negotiations.

“As people around the world mark Eid al-Fitr, the end of the holy month of Ramadan and a time for overcoming differences, the Secretary-General calls on parties to build on the current calm,” according to the statement.

Mr. Ban underscored that both Israelis and Palestinians have a responsibility beyond ceasing the ongoing hostilities to start a serious dialogue to address the root causes of the conflict.

“That means an end to the blockade of Gaza and ultimately to the nearly half century of occupation,” he said, adding that it equally means security for Israel.

“He urges the parties to heed his call and that of the international community for the sake of present and future generations of Palestinians and Israelis,” Mr. Ban added. 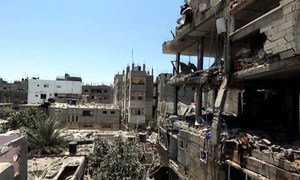 Welcoming the broadly observed 12-hour humanitarian pause in the Gaza conflict, United Nations Secretary-General Ban Ki-moon renewed his appeal to all parties to declare a week-long ceasefire as a prelude to restarting political negotiations.