“My message to Israelis and Palestinians is the same: Stop fighting. Start talking. And take on the root causes of the conflict, so we are not back to the same situation in another six months or a year,” Mr. Ban said in remarks to the press with Israeli Prime Minister Benjamin Netanyahu in Tel Aviv.

“We must address these underlying issues – including mutual recognition, occupation, despair and the denial of dignity – so people do not feel they have to resort to violence as a means of expressing their grievances.”

Mr. Ban, who is on a regional visit, arrived in Israel from Egypt, where he met earlier today with President Abdel Fattah Al Sisi and thanked him for his leadership role in the current efforts to establish a ceasefire in Gaza. His tour also included stops in Qatar and Kuwait and will also take him to Jordan and Saudi Arabia.

Israeli-Palestinian violence flared in the wake of the recent kidnapping and murder of three Israeli teenagers in the West Bank and the subsequent kidnapping and killing of a Palestinian teenager from East Jerusalem. Militants in Gaza have since stepped up rocket attacks against Israel, and Israel has intensified its airstrikes and launched a ground offensive into the enclave.

“The United Nations position is clear: We condemn strongly the rocket attacks. These must stop immediately,” said Mr. Ban. “We condemn the use of civilian sites – schools, hospitals and other civilian facilities – for military purposes.

“No country would accept rockets raining down on its territory – and all countries and parties have an international obligation to protect civilians,” he added.

During his meeting with Mr. Netanyahu, Mr. Ban reiterated his call for an immediate and unconditional ceasefire and stressed the need to alleviate the dire humanitarian situation in Gaza.

From Israel, Mr. Ban travelled to Ramallah in the West Bank, from where he briefed the Security Council, which is holding an open debate on the situation in the Middle East. He told the meeting via video conference that the parties must heed the Council’s call to return to negotiations in order to find an end to the conflict through a viable two-State solution.

“We, as the international community, have to assume responsibility for what is the result of a collective failure to advance a political solution for the Israeli-Palestinian conflict,” he stated. “We cannot return to the status quo ante – a concern which Palestinians and Israelis both share.”

He added that since the Council was last briefed on Sunday, the violence has reached “even more alarming” levels. “Yet again, too many civilians, including many children, are paying the price for this latest escalation. I once again urge all parties to rally behind a collective international effort to end the fighting. There is no time to lose.”

While in Ramallah, Mr. Ban met with Palestinian Prime Minister Rami Hamdallah and cabinet members. At a press encounter with Mr. Hamdallah, the Secretary-General said that the images of women and children killed and suffering in Gaza are almost too much to bear. 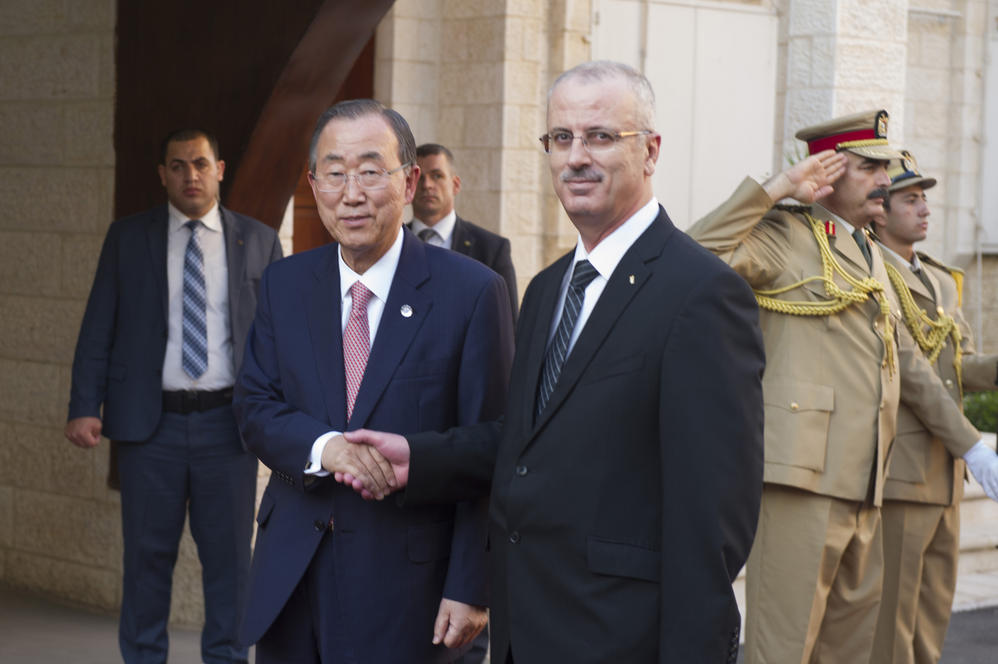 “Too many civilians are dying. Too many are caught in the crossfire. Too many families simply have no way out… I am concerned that further displacement will create chaos as well as yet more suffering of the Palestinian people.”

He noted that he has now come to the region three times as Secretary-General in a span of five years to help end a burning crisis.

“It is time to end the cycle of unrelenting suffering for the Palestinian people. In plain terms, that means any ceasefire must also tackle the root causes of instability in Gaza. Things cannot go back to the way they were – suffocating closures, chronic shortages of water and energy, economic underdevelopment, and chronic political impasse. Gazans must have real hope for reconstruction and progress.”

According to the UN Office for the Coordination of Humanitarian Affairs (OCHA), the recent escalation in violence has left over 500 people dead, the vast majority of them Palestinian civilians. Fighting has also displaced more than 100,000 people – more than 5 per cent of the population of Gaza – who are seeking shelter with the UN Agency for Palestine Refugees in the Near East (UNRWA).

“There is literally no safe place for civilians,” OCHA spokesperson Jens Laerke told reporters in Geneva. In addition to the casualties, almost 500 houses had been completely destroyed or severely damaged by Israeli airstrikes, he added.

At the press encounter with Mr. Netanyahu, the Secretary-General lamented the fact that too many Palestinian and Israeli mothers are burying their children. “We owe it to their sacrifice, and to Israelis’ and Palestinians’ aspirations for peace, to intensify efforts to find a solution.”

Secretary-General Ban Ki-moon today urged all parties to rally around collective international efforts to obtain an end to two weeks of bloodshed in Gaza and Israel and reach a ceasefire, as he continued his visit to the region with a stop in Cairo.