The recruitment and use of children by armed groups remained endemic in the Democratic Republic of the Congo (DRC) between 2010 and 2013, according to a new United Nations report, which cited impunity as a major factor in the ongoing abuses.

“Impunity has encouraged perpetrators to continue their violations against children,” Leila Zerrougui, the Secretary-General’s Special Representative for Children and Armed Conflict, told the Security Council Working Group on children and armed conflict today.

Briefing on the 5th Report on Children and Armed Conflict in DRC, she said there were close to 4,200 cases of recruitment and use of boys and girls by armed groups and the Government armed forces. One third of the cases involved children below the age of 15.

“The chronic instability in eastern DRC, the multiplicity of armed groups and the weakness of state authority have made children extremely vulnerable to all forms of conflict-related violence,” she stated.

According to a news release issued by the Special Representative’s office, the report documented over 900 cases of sexual violence against children committed by all parties to the conflict, while acknowledging that many more children are likely to have been victims of rape and other forms of sexual violence.

The situation was particularly bad in the country’s eastern provinces, where children were killed, maimed, victims of sexual violence and abducted by all parties.

Ms. Zerrougui called on the international community to continue supporting the Congolese authorities in their efforts to stop recruiting children into the army. For example, last March, the Government endorsed the ‘Children, Not Soldiers’ campaign and committed to making its army child-free by 2016. In addition, the Action Plan signed in 2012 by the Government to end the recruitment and use of children and sexual violence by the national army has led to the release of hundreds of children.

“The Government has demonstrated that progress is possible,” Ms. Zerrougui said. “The success of the Action Plan is essential. Non-State actors will not give up the recruitment and use of children as long as the country’s army continues to be on the Secretary-General’s list of child recruiters.”

Additional measures to end and prevent the recruitment, such as age verification mechanisms, continue to be put in place and need to be strengthened throughout the country.

The Special Representative added that fighting impunity is crucial to protect the country’s children. Perpetrators of grave violations against children must be investigated and prosecuted in a systematic manner.

♦ Receive daily updates directly in your inbox - Subscribe here to a topic.
♦ Download the UN News app for your iOS or Android devices.
child|soldiers 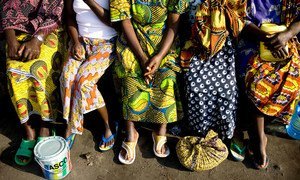 The appointment of a presidential adviser on conflict-related sexual violence and child recruitment in the Democratic Republic of the Congo (DRC) marks “a new dawn” in tackling these scourges, senior United Nations officials said today.