Kate Brooks/UNRWA Archives
Having lost everything, many displaced Palestine refugees from Syria have one main vegetable- or grain-based meal a day. Meat and fish rarely feature in the diet due to their high cost. Maashouk gathering, Tyre, South Lebanon. 22 May 2014
14 July 2014

The top United Nations relief official in Lebanon today warned of the implications for Lebanon as the number of refugees in the country grows amid the ongoing conflict in Syria as well as unrest in Iraq and now Gaza.

“Amid the carnage that we are seeing in Gaza, the continuing carnage in Syria and new dimensions in Iraq, Lebanon – which at the moment has the highest proportion of refugees of any country in the world – is facing increasing tension and is in danger of seeing it worsen,” Ross Mountain, the UN Humanitarian Coordinator in Lebanon, told a press conference in Geneva.

He said about 12,000 new Syrian refugees are entering Lebanon each week and the number is expected to reach 1.5 million by the end of the year, accounting for one-third of the country’s population.

He noted that the majority of the Syrian refugees are hosted by poor communities in Lebanon and competition for the dwindling resources is likely to cause friction and tension among the two groups.

Calling this “a formula for increasing tensions,” Mr. Mountain said he feared that the problem would only get worse and not only result in Syrian-Lebanese hostilities but also raise the possibility of Lebanese inter-sectarian problems.

“Lebanon has gone through a civil war some 25 years ago. The region does not need another country in that circumstance,” he said.

Mr. Mountain stressed the urgent need for countries to fulfil their pledges to the $1.6 billion humanitarian response plan for Syrian refugees living in Lebanon which to date is only 29 per cent funded.

Last September, Secretary-General Ban Ki-moon launched the International Support Group for Lebanon to help the country tackle its multiple challenges, including hosting such a large number of refugees.

Mr. Mountain said that the political solidarity and “moral support” has not been matched by much-needed financial support.

“I am suggesting that the importance of investing in Lebanon’s stabilization and resilience now can still avert Lebanon being added to those other countries in the region that are increasingly in the news,” he said.

♦ Receive daily updates directly in your inbox - Subscribe here to a topic.
♦ Download the UN News app for your iOS or Android devices.
Lebanon|refugees 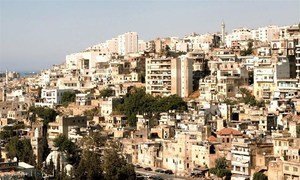 The United Nations envoy for Lebanon today stressed the urgent need for the country’s leaders to agree on the election of a new president as soon as possible in light of the situation on the ground, which is marked by renewed terrorist threats and the growing refugee population resulting from the conflict in neighbouring Syria.