The nature of the Afghan conflict has added yet another grim dimension as ground combat among the warring parties surpassed improvised explosive devices (IEDs) as the leading cause of conflict-related death and injury to Afghan civilians in the first six months of 2014, the United Nations reported today.

The nature of the Afghan conflict has added yet another grim dimension as ground combat among the warring parties surpassed improvised explosive devices (IEDs) as the leading cause of conflict-related death and injury to Afghan civilians in the first six months of 2014, the United Nations reported today.

This “disturbing upward spiral” has meant the number of children and other vulnerable Afghans killed and wounded since the beginning of the year rose dramatically and “is proving to be devastating”, according to the sobering new survey released in Kabul by the UN Assistance Mission in Afghanistan (UNAMA).

“More efforts are needed to protect civilians from the harms of conflict and to ensure accountability for those deliberately and indiscriminately killing them,” said the Director of Human Rights for UNAMA, Georgette Gagnon.

Attacks which fail to distinguish between a military and civilian objective and attacks that deliberately target civilians are serious violations of international humanitarian law and may amount to war crimes.

The 2014 Mid-Year Report on Protection of Civilians in Armed Conflict, prepared in coordination with the Office of the UN High Commissioner for Human Rights (OHCHR), notes that while civilian casualties caused by IEDs also increased to unprecedented levels over the same period in 2013, deaths and injuries caused by mortars, rocket-propelled grenades and small arms fire in ground engagements jumped dramatically as the frequency and intensity of these incidents increased in 2014, particularly in areas with concentrated civilian populations.

“The nature of the conflict in Afghanistan is changing in 2014 with an escalation of ground engagements in civilian-populated areas,” said the UN Special Representative for the Secretary-General in Afghanistan and head of UNAMA, Ján Kubiš. “The impact on civilians, including the most vulnerable Afghans, is proving to be devastating.” 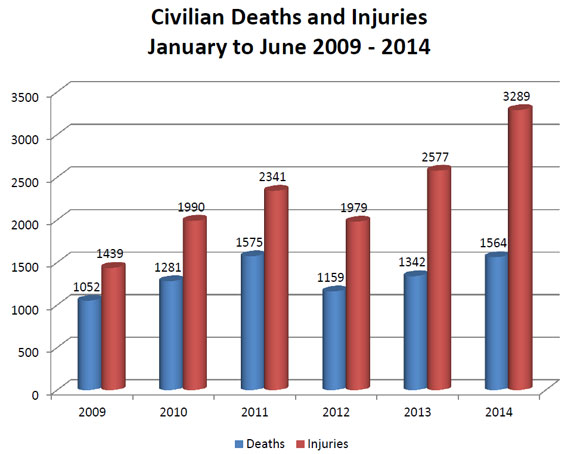 “In 2014, the fight is increasingly taking place in communities, public places and near the homes of ordinary Afghans, with death and injury to women and children in a continued disturbing upward spiral,” said UNAMA’s Gagnon.

The report states that the use of remote-controlled IEDs increased 13 per cent, with 205 incidents causing 637 civilian casualties including 150 deaths and 487 injuries. Of utmost concern, the use of indiscriminate illegal pressure-plate IEDs experienced a resurgence in 2014, killing 161 civilians and injuring 147, with a total 308 civilian casualties, a 33 per cent increase over 2013.

In the first half of 2014, the Taliban publicly claimed responsibility for 147 attacks that resulted in 553 civilian casualties with 234 civilians killed and 319 injured. While Taliban fighters appeared to direct 76 of these attacks at military targets that indiscriminately harmed civilians, 69 attacks deliberately targeted civilians, including tribal elders, civilian Government and justice sector employees, and civilians in restaurants.

UNAMA attributed 74 per cent of all civilian casualties to anti-Government elements and nine per cent to Pro-Government Forces (eight per cent to Afghan national security forces and one per cent to international military forces), while 12 per cent occurred in ground engagements between insurgents and Afghan forces which could not be attributed to a specific party. The remaining casualties were caused mainly by explosive remnants of war.

Compared with the first six months of 2009, when UNAMA began to monitor civilian casualties, the number of civilians killed by anti-Government elements doubled in 2014 while the number of civilians killed by Pro-Government forces has been cut by half almost entirely due to reduced civilian casualties from aerial operations of international military forces.

“The long-term trend shows that Anti-Government Elements are responsible for an increasingly large share of civilian casualties in the conflict,” said Special Representative Kubiš. “While all parties to the conflict – including Afghan national security forces – must do more to uphold their obligations under international law to avoid harm to civilians, the onus is clearly on the Taliban and other anti-Government elements to reverse this trend and deliver on their stated commitments to do so.”

UNAMA made a number of recommendations addressed to anti-Government elements, the Government of Afghanistan and the International Military Forces in in its 2014 Mid-Year Report to improve the protection of civilians.

UNAMA shared a draft of it 2014 Mid-Year Report on Protection of Civilians in Armed Conflict with the Government of Afghanistan, the Taliban and the International Security Assistance Force (ISAF). Comments from all these parties were carefully reviewed and addressed as appropriate in the report. UNAMA continues to work with all parties to the conflict to support their efforts to protect civilians and to end and prevent civilian casualties. 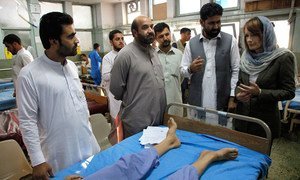 Civilian casualties in Afghanistan rose by 14 per cent last year, according to a new report released on Saturday by the United Nations, which also found that it was the worst year since 2009 in terms of the number of women and children killed or injured as a result of conflict-related violence.