UNHCR/P. Rulashe
A precious food distribution in South Sudan. UNHCR and WFP fear that too many people may be cut off from assistance if conflict continues in the country.
4 July 2014

Already working hard to get supplies to people in South Sudan cut off by flooded roads, the United Nations World Food Programme (WFP) today warned that the rains, as well as the ongoing fighting, are pushing the country towards a “hunger catastrophe”.

“Fighting has led to alarming food insecurity in areas isolated by conflict,” WFP spokesperson Elisabeth Byers said today in Geneva, explaining that the agency is facing serious challenges in transporting food to “deep field” locations due to access and security concerns.

This has hampered WFP's annual pre-positioning exercise, in which it stocks up warehouses in areas that will become inaccessible during the rainy season. Heavy rains had made most of the roads in Unity State impassable, she added.

Moreover, Ms. Byrs said, WFP estimates that more than 4,600 metric tons of food has been lost through looting in several locations – enough to feed more than 275,000 people for a month. “[We] urge all parties to respect the neutrality of humanitarian agencies, and to protect the humanitarian supplies so badly needed to assist innocent civilians affected by the conflict,” she said.

Despite those immense challenges due to insecurity, she said the agency had dispatched more than 91,000 metric tons of food around the country since the start of 2014.

WFP is using a combination of airlifts and airdrops to reach people in remote areas of Jonglei, Unity and Upper Nile states. As the rainy season set in and road access is cut off to two-thirds of the country, the agency has launched a special operation requiring almost $17 million to provide 10 aircraft needed for food deliveries.

She went on to explain that mobile inter-agency teams are reaching the most inaccessible locations where the nutrition situation is critical. “They are deployed in remote, hard-to-reach areas to support the crisis response,” said Ms. Byrs, adding that the teams included staff from other UN agencies and non-governmental partners to provide a full package of food, nutrition and livelihood assistance along with emergency health and protection services.

She specified that WFP has so far provided food and nutrition support to more than 1.2 million people, of whom around 300,000 people are in 16 protected sites, and 900,000 beneficiaries across South Sudan have been provided with food assistance.

“WFP needs significantly more donor support to continue providing food assistance,” she said, noting that the agency has a funding shortfall of $419 million for its emergency operation to reach the 2.9 million people it planned to help by the end of 2014.

Also at the briefing Jens Laerke, spokesperson for the UN Office for the Coordination of Humanitarian Affairs (OCHA), said that food was a large part of the appeal for South Sudan, but there were other needs as well. As such, the revised humanitarian appeal stood at $1.8 billion, out of which, some 42 per cent had been received thus far, he said, underscoring the urgent need for the remainder of those funds to come in.

Ms. Christiane Berthiaume, spokesperson for the International Organization for Migration (IOM), added that the security situation is indeed deteriorating across South Sudan, and the agency has been engaging a response effort for internally displaced persons in Bor, Malakal and Bentiu.

Giving an example of the breadth of the deepening crisis, she said that there were now 40,000 displaced people at a UN base in Bentiu, where there had been only 2,000 several months ago. “The situation in Bentiu is particularly dire. The number seemed sure to increase, and the situation will get worse. There is a realistic danger that famine could be declared in September,” she warned. 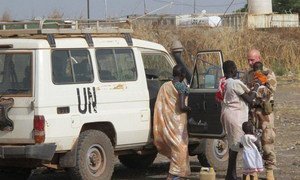