OCHA
Sagher Ullah stands in a queue at a WFP distribution point for internally displaced in North Waziristan, Bannu.
1 July 2014

United Nations humanitarian agencies and partners are aiding nearly half a million people along the Pakistan-Afghan border, uprooted by a Pakistani offensive against armed insurgents in the North Waziristan Agency tribal areas.

Since the full-scale military operations were announced on 15 June, some 400,000 people had left their homes within the first week, according to the UN Office for the Coordination of Humanitarian Affairs (OCHA). An estimated 74 per cent of the displaced are women and children

“Thousands were expected to remain displaced as the military operations are expected to be extended to other parts of the Agency,” spokesperson Jens Laerke cautioned journalists in Geneva.

An additional 95,000 people are moving into Afghanistan’s Khost province.

Mr. Laerke said the Regional Disaster Mangement Authorities had established two camps but only a small percentage of the 468,000 displaced people were seeking shelter assistance in camps.

“They preferred to stay with relatives or friends or in rented accommodation where they had better access to running water and electricity,” he said.

At registration, each displaced family received $400 to cover medical needs, rental support and other necessities, including a Ramadan package this month. Each month after, the family will receive $150. 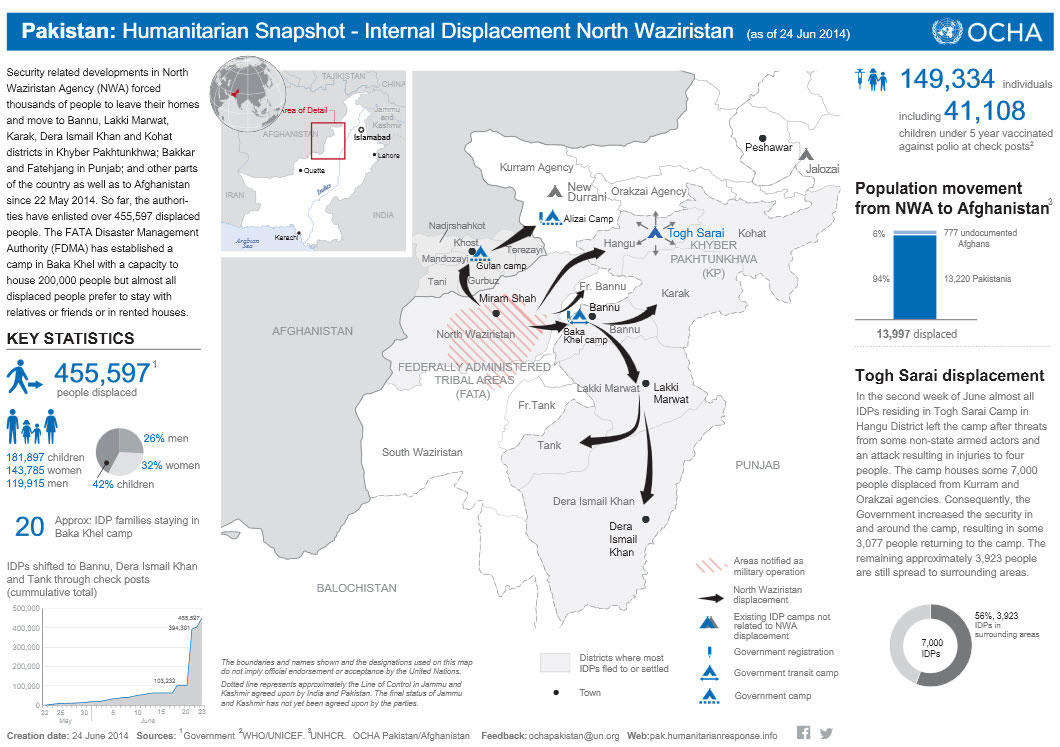 Meanwhile, the international community is supporting the displaced who need medicines, immunization, water, sanitation and hygiene services, as well as educational supplies and food.

UN World Food Programme (WFP) spokesperson Elisabeth Byrs said the agency is distributing food from six locations to reach all the families with two-week rations of wheat flour, pulses, fortified vegetable oil and salt, as well as high-energy biscuits. The package is usually expected to last one month, but the average family size – between 11 and 13 – is larger than usual.

The Government has provided the WFP with 25,000 metric tons of wheat. Combined with funds from donors, the UN agency says it can continue its assistance until early September.

WFP has appealed for $29 million for its relief operations through the end of the year.

Less than a week after an urgent funding appeal by the heads of the lead UN food and refugee agencies, lack of donor attention threatening to cut off aid to thousands trying to escape violence in the Central African Republic (CAR) emerged again today as a top item in the bi-weekly humanitarian briefing in Geneva.