UNHCR
A displaced child in a makeshift camp in the Golan area of Gurbaz district, Khost province.
26 June 2014

Deeply concerned by the rising number of civilian casualties in ongoing military operations in the southern Afghan province of Helmand, the head of the United Nations Assistance Mission in the country (UNAMA) today urged all parties to take precautions to ensure civilian protection.

Since 21 June, ongoing clashes between the Taliban and Afghanistan National Security Forces have resulted in deaths and injuries in the province’s Sangin, Musa Qala, Naw Zad and Kajaki districts – with the majority of fighting concentrated in Sangin, said UNAMA in a press release.

“The high number of civilians killed and injured in these ongoing military operations is deeply concerning,” said the Secretary-General’s Special Representative and head of UNAMA, Ján Kubiš.

The UN Mission has documented at least 30 civilian deaths and 35 injuries in Sangin alone, in addition to civilian casualties in other districts of Helmand province.

Health authorities, victims and witnesses attributed the civilian deaths and injuries to the use of mortars that impacted homes, civilians caught in crossfire and improvised explosive devices.

“All parties to the conflict are obliged to take all feasible precautions to protect civilians during military operations,” Mr. Kubiš asserted.

The UN Mission is particularly concerned about the launching of mortars and grenades into populated areas which has resulted in civilian casualties, and calls on the parties to take all necessary measures to reduce harm to civilians from the use of these weapons.

Finally, UNAMA extends its condolences to the families of those killed and wishes a speedy recovery to those injured. 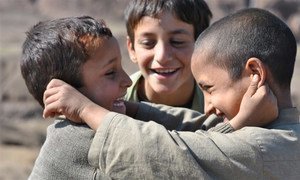 Pakistan’s military offensive against Taliban militants in the north of the country has displaced more than 400,000 people and the number continues to rise, the United Nations refugee agency reported today.