Broader community-based engagement is vital to tackling non-communicable diseases – such as cancer, cardiovascular disease and diabetes – which are one of the major challenges for development in the 21st century, the President of the United Nations General Assembly stressed today.

“An African proverb says ‘it takes a village’ to raise a child, but the same can be said regarding our approach to the health challenges confronting us. It takes a village to prevent and control non-communicable disease (NCDs). Thus, broader community-based engagement is key,” stated John Ashe.

Opening the Assembly’s informal interactive hearing with non-governmental organizations (NGOs), civil society groups, the private sector and academia, Mr. Ashe said that no one entity working alone can tackle the global burden and challenges of NCDs.

“The probability of dying from any of the major NCDs between the ages of 30 and 70 years ranges from 10 per cent in developed countries to 60 per cent in developing countries,” he pointed out. “This stark contrast not only suggests the depth and disparity of the problem, but is also a reminder that global solutions will require the support of all relevant stakeholders.”

Today’s meeting provides participants with the opportunity to share experiences and perspectives in the prevention and control of NCDs. It also aims put forward specific recommendations for the consideration of Member States at the comprehensive review and assessment to be held next month.

Three years ago, the Assembly adopted the landmark Political Declaration on NCDs. Through the World Health Organization’s (WHO) Global Action Plan and Comprehensive Global Monitoring Framework, the international community has a “clear roadmap” to combat the threat of these diseases, said Mr. Ashe.

“The implementation of this roadmap at all levels must be a priority and augmented by the ongoing work and collaborative efforts of non-governmental organizations and civil society, as well as by the commitment of the private sector,” he stated.

“Your continued efforts to raise awareness about NCDs and to strengthen action at the global, regional and national levels have resulted in tremendous progress. We see the fruits of your labour in the relabeling of food products, the reduction in salt content in food products, and in more responsible marketing of foods and non-alcohol beverages to children.”

Civil society, the President added, is well-placed to mobilize the necessary political will, public awareness and support in the fight against NCDs.

“However, you also have the important role of ensuring promises are kept. For NCDs, reaching commitments and observing global goals, targets and indicators is facilitated by organizations such as WHO, with assistance from local NGOs. Together, this assessment of progress can bring the appropriate pressure to bear on governments in order to accelerate prevention and treatment for NCDs.”

Among the issues the hearing will address are the items to be considered for inclusion in the outcome document to be adopted at next month’s review; best practices and lessons learned; and ways to prioritize NCDs in global and national development agendas, including the global development agenda beyond 2015, the target date for the achievement of the anti-poverty targets known as the Millennium Development Goals (MDGs). 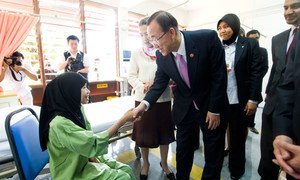