Stability and reconciliation can hardly be achieved in Thailand if human rights guarantees are neglected, a group of United Nations independent experts declared today, while urging the current authorities to reverse all measures affecting basic rights and to restore democratic rule in the country.

“In moments of political crisis and turbulence, it is crucial to promote the full respect of the rule of law,” the experts stressed in a press release from the UN Human Rights Office (OHCHR).

The four experts, tasked with monitoring protection and promotion of human rights on a range of issues – arbitrary detention, enforces disappearances, freedom of expression and torture and degrading treatment ¬– are raising the alarm in the wake of months of unrest that culminated in late May with the military’s declaration of martial law and subsequent takeover of the Government.

Secretary-General Ban Ki-moon and UN High Commissioner for Human Rights, Navi Pillay both issued strong calls for Thailand to ensure respect for human rights and promptly restore the rule of law, following the issuance of 21 announcements and three Orders by the National Peace and Order Maintaining Council (NPOMC) – the new body that has seized power from the caretaker government.

The 11th announcement suspended constitutional rights and freedoms. Six announcements severely restricts freedom of expression and freedom of assembly, including censorship of all media outlets, closure of television and radio stations, prohibition of information critical of the NPOMC, restrictions on internet and prohibition of political gatherings of more than five people.

“The various limitations to fundamental rights put in place since the military assumed control of the country and the Constitution was suspended are deeply disturbing,” noted the experts in their statement today. “Reportedly numerous individuals remain arbitrarily detained, and unacceptable restrictions continue to be imposed on freedoms of expression, association and peaceful assembly.”

Particular concern was expressed with regard to the chilling effects of the summoning by the military of more than 440 individuals, including political leaders, academics, journalists and activists to army bases. Many remain in detention without access to family or lawyer. Some are held incommunicado in unknown locations and may be at risk of torture or ill-treatment.

“Public criticism of authorities and the freedom of the Thai media are negatively affected by various measures, including the ban on political gatherings of more than five persons and the reported closure of a vast number of community radios,” the experts stressed.

“Restoring the space for public dialogue is crucial to allow durable solutions to the political impasse affecting Thailand to be forged,” the experts underscored.

The group of experts requested information from the current authorities on multiple allegations of human rights violations they received after the imposition of martial law on 22 May 2014. 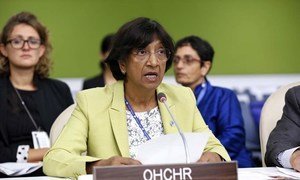 The United Nations High Commissioner for Human Rights today urged Thailand to ensure respect for human rights and a prompt restoration of the rule of law, echoing a call made yesterday by Secretary-General Ban Ki-moon following the military coup.