UNAMA/Fardin Waezi
Two leading candidates from the first round of Afghanistan's presidential election, Dr. Abdullah Abdullah and Dr. Ashraf Ghani Ahmadzai, are competing in the second round run-off.
12 June 2014

As the Afghan people head toward a historic run-off presidential election that will culminate the country’s first-ever democratic transfer of power, the top United Nations official there is encouraging them to actively participate in the polls, deliver the necessary change and help build a better future for their long-troubled nation.

“Afghanistan is heading for one of the most important days in the modern history of the country: the run-off Presidential elections on the 14th of June,” the Secretary-General’s Special Representative for Afghanistan, Ján Kubiš, said today at a news conference in the capital, Kabul.

His key messages ahead of the vote included a call on the Afghan security forces to secure the polls, asking the country’s two election management bodies to fully implement recommendations to improve the voting process and urging responsible actions from the candidates and their supporters.

“I am convinced that next Saturday, the people of Afghanistan will – with the same determination, resilience and courage [shown in the first round of elections] – manifest their wish for a peaceful, prosperous, stable and united Afghanistan,” he added.

“My first message from this press conference is to the people of Afghanistan: use the opportunity, deliver the necessary change, reinforce the fundaments of your future, take part in the elections,” he declared.

The Afghan Presidential elections, which mark the first-ever transfer of power from one elected leader to another in the country’s history, are in a run-off stage after none of the candidates in the first round of the vote, held on 5 April, achieved the 50 per cent plus one result needed to win.

Two leading candidates from that round, Dr. Abdullah Abdullah and Dr. Ashraf Ghani Ahmadzai, are competing in the second round run-off.

In remarks addressed to the Afghan National Security Forces (ANSF), Mr. Kubiš expressed the hope that they would be “up to the task this time once again” with their “ability, resilience, capability and courage” to provide a secure environment for voters as was done in the first round.

The UN Assistance Mission in Afghanistan (UNAMA), which Mr. Kubiš heads, has been coordinating international support for the elections, and engaging with and supporting the electoral institutions to conduct the best possible elections in Afghanistan.

Elsewhere, the UN system, particularly through the UN Development Programme’s ELECT II (Enhancing Legal and Electoral Capacity for Tomorrow II), has been providing direct technical assistance in the organization of the elections. 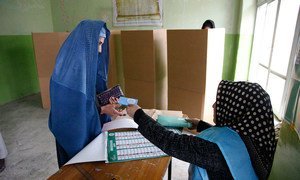 As Afghans prepare to vote in the presidential run-off, senior United Nations officials in the country are calling on key stakeholders to improve the electoral process, and reminding policymakers that Afghan men, women and children should be meaningfully involved in the peace efforts and future direction of their country.