With nearly everyone on Earth now having access to a mobile cellular network and some three billion people online, a United Nations information and communication technology (ICT) forum opening in Geneva today called for greater efforts to ensure that everyone also has access to broadband connectivity.

“We are here to pave the way for the future and set the roadmap for sustainable development in the post-2015 era,” UN International Telecommunications Union (ITU) Secretary-General Hamadoun Touré said in his opening message to theHigh-Level Event on the World Summit on the Information Society (WSIS)+10.

Addressing hundreds of representatives of Government, civil society, academia and the private sector, Mr. Touré noted that world leaders at the WSIS forum in 2003 – the second phase of the Summit was held in Tunis in 2005 – had agreed to promote the use of ICTs to build an inclusive information society and share information and knowledge to promote sustainable development and improve lives.

Throughout this week, participants will continue to review progress made in the past 10 years, but also discuss a vision of what information society should look like in the next decade.

One of the highlights of today’s event was the release of the review of Final WSIS Targets Review, compiled by the Partnership on Measuring ICT for Development, of which ITU is a founding member. It shows mixed results with authors calling for stronger ICTs.

“This report is a major milestone in tracking the information society worldwide,” said ITU Deputy Secretary-General Mr. Houlin Zhao referring to the document launched as part of today’s opening day. “It shows that while significant achievements have been made in the last decade, the digital divide remains a major barrier to an inclusive information society.”

According to the Final WSIS Targets Review, significant progress has been made in increasing mobile cellular coverage with all rural communities in the world likely to be covered by 2G mobile cellular signals by 2015. However, Internet connectivity remains a challenge and access to broadband continues to be unequal, with penetration rates around four times higher in developed countries as compared to developing ones.

In addition, the review reports that there is a growing divide in broadband access between enterprises in developing and developed countries, and between small and large companies in those countries.

Among other findings, the authors report that while some countries have successfully integrated computers in schools, less than 10 per cent of schools in many of the world’s poorest nations are connected to the Internet. Similarly, fewer than 10 per cent of teachers in low-income countries have been trained to effectively use ICTs in their classrooms.

The number of websites has dramatically increased in the decade between 2003 and 2013, with more than 300 languages now available on Wikipedia and more than 100 on major social networks. 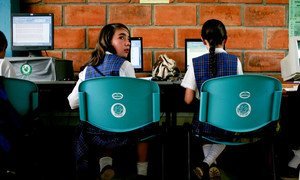 Releasing new statistics today, the United Nations International Telecommunications Union (ITU) announced that by end 2014, there will be nearly three billion Internet users – two-thirds of them from the developing world – with mobile-broadband penetration approaching 32 per cent.