UNAMA/Fardin Waezi UNAMA
An aerial inspection of the Nowabad area of Abi-Barik village in the Argo district of Badakhshan province, Afghanistan, location of a deadly landslide which killed hundreds in early May 2014.
3 June 2014

New flash floods in northern Afghanistan over the weekend have affected thousands of homes and washed away agricultural land and roads, the United Nations Office for the Coordination of Humanitarian Affairs (OCHA) reported today, noting that the number of people affected by flooding nationwide now stands at 140,000.

Jens Laerke, OCHA’s spokesperson in Geneva, told reporters that among the areas affected in the latest flooding are Faryab, Sar-i-pul, Balkh and Baghlan.

“Initial reports from Faryab province indicate that some 6,000 houses have been destroyed, livestock has drowned, and agricultural land, roads and bridges have been washed away,” he stated.

Afghanistan is extremely susceptible to recurring natural disasters, due to its geographical location and years of environmental degradation. The latest floods come on the heels of the landslide that struck the province of Badakhshan in early May, killing hundreds of people.

OCHA said that 16,000 families in areas affected by the heavy rains and floods last month have already received emergency aid and that enough relief supplies are in Afghanistan to help thousands more in need.

Mr. Laerke said that among the priorities in the wake of this weekend’s floods is preventing the spread of disease.

“In the newly flooded areas, the focus for immediate relief will again be clean water, sanitation and hygiene to reduce the risk of waterborne diseases. As of today, no outbreak of malaria, cholera or acute watery diarrhoea has been reported,” he stated. 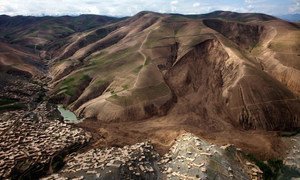 Following a visit today to the site of the massive landslide which killed hundreds in north-eastern Afghanistan late last week, two senior United Nations humanitarian officials highlighted the longer-term needs of people displaced by natural disasters in the country, as well as the need for long-term preventive measures.