FAO/Frank Nyakairu
Somalis need support in a wide range of activities, from cropping to livestock breeding and fisheries.
2 June 2014

The United Nations today voiced increasing concern over the food security situation in Somalia, as food stocks from the previous harvest become depleted and prices continue to rise sharply, and the country experiences late rains and erratic weather patterns.

The situation is being exacerbated by conflict and inadequate funding for priority actions designed to address the needs of hard-hit communities, according to a new report by the Food and Agriculture Organization (FAO).

“The people of Somalia cannot afford to wait to see how the next harvest turns out. They need urgent support to improve their food security and maintain their livelihoods, most of which depend directly on agriculture,” said Luca Alinovi, acting Head of FAO’s Somalia Office and FAO Representative in Kenya.

FAO and its partners are urgently seeking $18 million to scale up rapid interventions to prevent and mitigate the further deterioration of the food security situation, the agency said in a news release.

A “weak” January harvest coupled with a delayed start to the 2014 gu season (April-June) have fuelled concerns for the food security situation. FAO noted that harvests were “well below average” in the central and southern areas of the country, following weeks of late and erratic rainfall, as well as flooding around rivers.

Lower stocks, coupled with the market and trade disruptions, led to double-digit increases in wholesale prices of maize and sorghum in some areas.

In the main producing areas of the south, April retail prices of maize and sorghum were as much as 60 and 80 per cent higher, respectively, than one year earlier, also due to the scaling back of humanitarian assistance operations.

The gu rains resumed in early May, but rains will need to continue through the end of June in order to prevent further deterioration of the food security situation in Somalia.

Conditions are expected to improve slightly in August and September when the harvest is ready for consumption, but the positive impact is likely to be moderate given the unfavourable prospects of the current season.

The number of people in need of humanitarian assistance in Somalia is currently estimated at about 860,000, including over 200,000 malnourished children under five years of age. 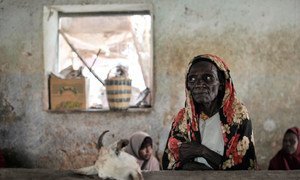 Poor rains, high food prices and ongoing conflict have intersected to push Somalia once gain to the brink of crisis, the United Nations Humanitarian Coordinator in the country said today, warning that without immediate action, the fragile food security situation could worsen in the coming months, especially if funding shortages force essential projects to shut down.