World Bank/Alex Baluyut
Men at work pouring cement on a rooftop.
27 May 2014

Developing countries that invested in quality jobs from the early 2000s grew nearly one percentage point faster every year since 2007 and were better able to weather the economic crisis than comparable economies, according to a new report by the United Nations labour agency.

The annual report of the International Labour Organization (ILO), The World of Work 2014, focuses this year on the relationship between good jobs and national development through analysis of 140 developing and emerging nations.

“Decent work opportunities for women and men help trigger development and reduce poverty,” Guy Ryder, Director-General of the ILO,” said in a news release on the launch of the report, subtitled Developing with Jobs.

“Development doesn’t happen through such things as exports, open trade and foreign direct investment on their own,” Mr. Ryder said.

The report cites Senegal, where wage and salaried workers increased from around 12 per cent in 1991 to 26 per cent in 2013, as a case in point, showing that productivity increased there by an average of 0.5 per cent per year.

In Peru, it says, wage and salaried workers increased by an estimated 15 percentage points, and productivity grew by an average of 1.8 per cent per year. In both countries, inequality was also reduced as the percentage of working poor declined, it says.

“In view of the evidence, it is essential to make decent work a central goal in the post-2015 development agenda,” stressed Raymond Torres, Director of the ILO Research Department.

“Over the next decade, developing countries will need to create around 40 million new jobs every year in order to keep up with the growing working age population,” he said.

The report, which also covers global unemployment figures, social protection measures and economic migration flows, shows a smaller increase in unemployment than previous projections, with some 200 million out of work in 2013, predicted to rise by 3.2 million through 2014. 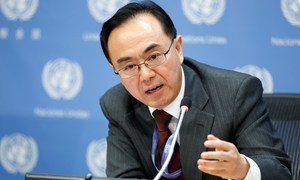 The global economy is expected to strengthen over the next two years, despite a downgrade of growth prospects for some developing countries and transition economies, and “stubbornly slow” job growth, according to the United Nations World Economic Situation and Prospects 2014 mid-year update launched today in New York.