At a “time of test” for the human family, Secretary-General Ban Ki-moon today encouraged students and faculty at Shanghai’s Fudan University to help the United Nations as it begins in earnest work on the fundamental challenge of building an inclusive, universal 21st century blueprint “that will steer our world onto a truly sustainable, prosperous and peaceful path.”

“We are living in a very crucially important time. Thus, your responsibility and your engagement and your vision will be very important, particularly for faculty members and professors,” Mr. Ban said in his address, as he wrapped up his week-long visit to China.

In 2000, world leaders gathered at the UN and adopted a blueprint that came to be known as the Millennium Development Goals (MDGs), aiming to, among others, provide fair opportunities, enhance opportunities for education, and improve healthcare, all by 2015.

“Thanks in large measure to China, we have met one goal – cutting in half the abject poverty level in half by 2015,” Mr. Ban said, explaining that the target had in fact been achieved by 2010, according to World Bank statistics. “That is owing to China’s great efforts, so we were able to lift out of poverty half of the population.”

“But there are many other issues…which all countries must get on board for. We are working very hard,” said Mr. Ban, acknowledging that many of the MDGs would have to be carried over in the new development agenda as they would not be met. “That is why we are aiming for 2030,” for achievement of the emerging sustainable development goals.

“There is much unfinished business. Too many countries and vulnerable people are being left behind,” he said, underscoring that it has become clear that the UN family must give greater attention to pressing issues central to success in the 21st century, including climate change, inequality, the rule of law, violence against women and the impact of disasters and many conflicts.

Stressing that the difficult way ahead would require “a global vision,” he cited a raft of challenges that must be addressed, including the “the tragedy in Syria,” where more than 150,000 people have been killed, and the continuing conflicts in South Sudan and the Central African Republic.

Moreover, the Secretary-General continued, the impacts of climate change are already with us “and will affect generations to come unless we take immediate action now.”

“You will soon inherit the responsibility, while we are doing our best to make this planet Earth more sustainable, soon it will become your responsibility…The torch will be given to you,” he said, adding specifically that the world’s youth would become the environmental activists who fight pollution, promote renewable energy and deliver a low-carbon growth model to combat climate change.

He went on to appeal to the students to evince the calm, compassion, cooperation and courage to recognize that the global logic of the times requires that all “work together for peace and a life of dignity for all.”

“This world has become one family of nations. So my message is that you must be a global citizen, having a global vision.”

Later in the day, at a lunch on Maternal and Child Health hosted by the Chinese People's Association for Friendship with Foreign Countries, the National Health and Family Planning Commission, the Secretary-General again noted China’s significant progress towards the MDGs, including by placing a priority on healthy mothers and healthy children. 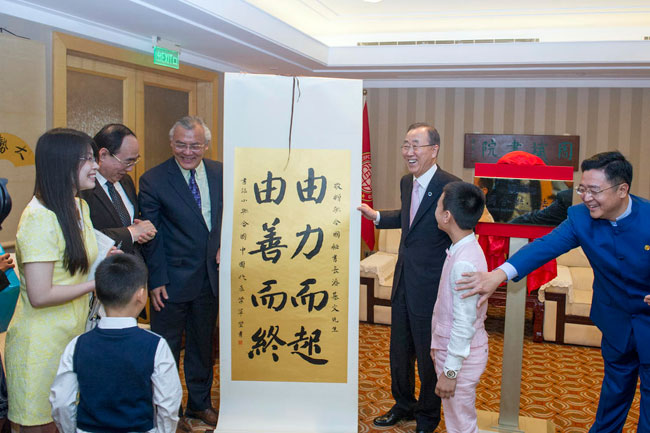 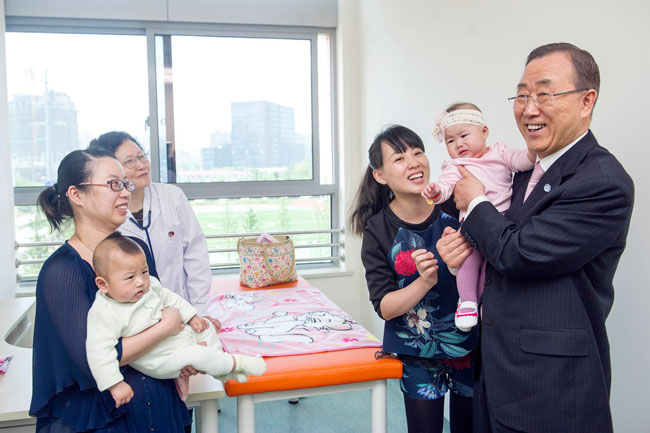 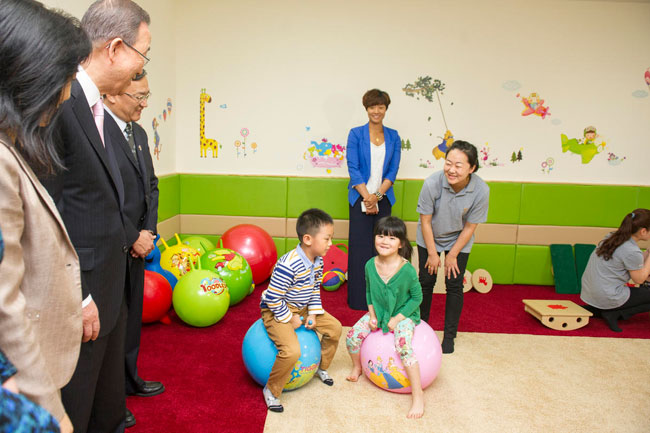 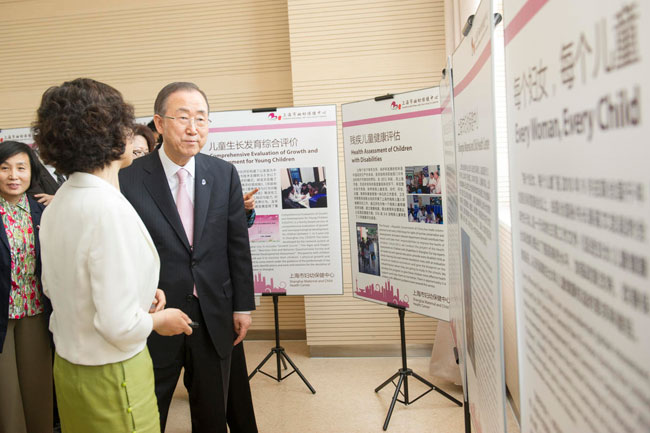 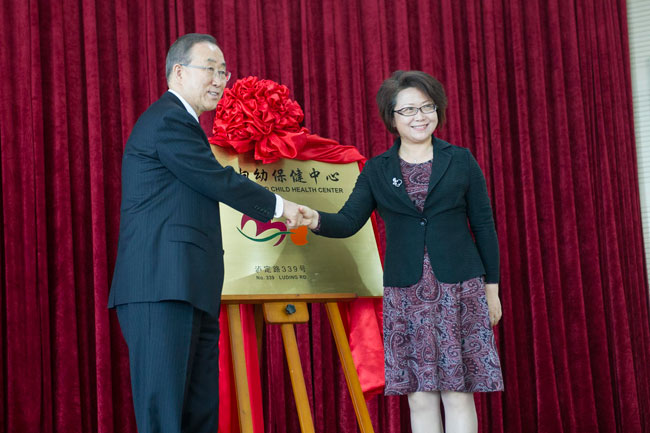 Secretary-General Ban Ki-moon pays a visit to the Zhou Bin Calligraphy Culture Institute and attends the opening of the Shanghai Municipal Centre for Maternal and Child Health Every Woman Every Child in Shanghai, China. UN Photo/Mark Garten

“China is one of the few countries to already meet the Goal on child mortality. We must work to spread these successes to every woman and child – everywhere,” he continued, adding that China had been one of the first countries to commit to his “Every Woman, Every Child” initiative and to support the Global Strategy for Women’s and Children’s Health.

Success on these fronts now and in the future depends on five factors, he said, citing: strong leadership at the highest levels; the commitment of multi-stakeholder partners at the country level; predictable financing; accountability for resources and results; and innovation.

“These are the core principles of Every Woman, Every Child,” he said, noting that much progress has been made but there is still a long way to go, especially in improving well-being for the hardest to reach.

As a developing country, China has a major role to play in sharing its many valuable experiences, particularly through South-South collaboration. The Chinese private sector has some of the world’s most innovative minds, spurring unprecedented growth, he said.

“In this room we have leaders from the pharmaceutical industry, agriculture, finance, the media, energy companies, academia and health practitioners. The opportunities for fruitful collaborations are plentiful,” said the UN chief, stressing that securing the health of women and children is vital for sustainable development and a life of dignity for all. 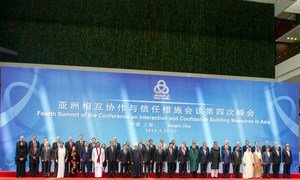 While hailing Asia’s dynamism, United Nations Secretary-General Ban Ki-moon today cautioned leaders gathered in Shanghai that despite best efforts, the wider Asian theatre is the scene of some of the "most worrying tensions in the world today," and urged healing the region’s rifts, including the Syrian crisis, the spread of deadly weapons, and local territorial disputes, through cooperation and common interests.