IRIN/Nyan Lynn
A Kachin woman prepares dinner outside her home at an IDP camp outside Myitkyina in Myanmar's northern Kachin State.
16 May 2014

With increased fighting in parts of Myanmar that is preventing access to civilians, the United Nations and humanitarian partners today said they were seriously concerned by the displacement of thousands of people over the past weeks and called for an end to the fighting.

More than 2,700 people were forced to leave their homes and an unconfirmed number of other people to flee into bordering China, according to the UN Office for the Coordination of Humanitarian Affairs (OCHA).

These figures are in addition to the more than 100,000 people who have been displaced since fighting between Government forces and Kachin rebels began almost two years ago. The fighting intensified this April in Man Win Gyi, southern Kachin state, limiting humanitarian access to the areas.

The violence is “raising concerns for the protection of civilians trapped along the borders of China, Kachin state, and Shan state,” OCHA said.

The humanitarian partners are particularly concerned that the approaching rainy season will bring higher risks of flooding and water-borne diseases. As a result, water, sanitation, and hygiene are increasingly becoming priorities for aid workers.

“The deteriorating security situation is already hampering access to the affected areas and the poor conditions of the roads during the rainy season will make it even more difficult to respond from now on,” said Florent Turc, Field Coordinator for Solidarités International in Kachin, cited in the OCHA press release.

The UN humanitarian chief in the country said local organizations have been at the forefront of the humanitarian effort in Kachin, covering the most urgent needs within the displaced and affected communities.

Mark Cutts, Head of Office for OCHA in Myanmar, said he was pleased that these aid works have had more regular access to the frontlines since September 2013, but “in the long run we need full and sustained access by international actors to all affected communities to adequately support the response of local humanitarian NGOs [non-governmental organizations].” 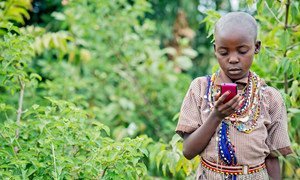 Mobile technology can advance literacy and learning in underserved communities around the world, according to a new report published today by the United Nations education agency on the occasion of World Book and Copyright Day.