UNIFEED still
WFP delivers supplies into the landslides zone in Argo district of Badakshan province to over 700 needy families.

6 May 2014
In the wake of last week’s massive landslide in north-eastern Afghanistan, a senior United Nations relief official today voiced deep concern about the impact of conflict and natural disasters in the country, and urged the world to step up support to vulnerable communities.

In the wake of last week’s massive landslide in north-eastern Afghanistan, a senior United Nations relief official today voiced deep concern about the impact of conflict and natural disasters in the country, and urged the world to step up support to vulnerable communities.

As the country undergoes a major security, political and economic transition, any significant reduction in international aid could have a devastating impact on people’s lives, warned Kyung-wha Kang, Assistant Secretary-General for Humanitarian Affairs and Deputy Emergency Relief Coordinator.

“It is important that the transition is centred on the Afghan people and what needs to be done to tangibly improve their lives,” she said as she wrapped up her three-day visit to the country.

“Solutions to tackle major issues such as access to essential services, including healthcare, and timely assistance to displacement are paramount for Afghanistan’s overall transition and development,” she added.

“It is very clear that insecurity remains a major concern – both endangering the lives of civilians and constraining humanitarian access,” stressed Ms. Kang, warning that the conflict has prevented people from accessing to medical care severely. “Last year there was a 60 per cent increase in the number of people treated for conflict-related injuries,” she said.

The deputy relief chief also emphasized the needs of those displaced by natural disasters in the long run, following her visit to Badakhshan in the country’s northeast, where hundreds of people were killed by a massive landslide late last week.

During a meeting with Afghan officials, Ms. Kang expressed her condolences to the victims and survivors of the landslide. Moreover, she promised the continuous support from the UN system for the country.

Of equal importance, she said, is disaster risk reduction, given that natural disasters have the tendency to recur in many areas of Afghanistan.

“Investing in disaster risk reduction to improve preparedness, and reduce and better mitigate underlying risks and vulnerabilities must remain a key priority,” added Ms. Kang. “We need to continue helping to strengthen the Government’s ability to prepare for and respond to disasters which have such a devastating impact on the lives of so many Afghans.”

Another priority for UNICEF is to provide psycho-social support for children, whose family members had lost lives and were traumatised. Mr. Boulierac also reported that specialized UNICEF teams were helping children re-establish their new lives as soon as possible, including ensuring that affected children continued to attend school. Some 32,000 families had been provided assistance in terms of drinking water thus far. 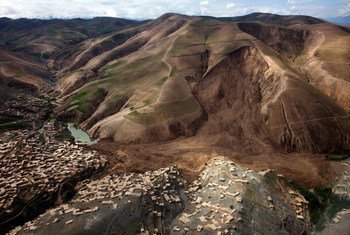 5 May 2014
Following a visit today to the site of the massive landslide which killed hundreds in north-eastern Afghanistan late last week, two senior United Nations humanitarian officials highlighted the longer-term needs of people displaced by natural disasters in the country, as well as the need for long-term preventive measures.