UN Photo/David Manyua (file)
Smoke drifts into the sky from buildings and houses hit by shelling in Homs, Syria (June 2012).

30 April 2014
United Nations Secretary-General Ban Ki-moon today condemned ‘in the strongest terms’ the latest attacks in Syria – which left dozens of civilians dead or wounded from mortar fire and shelling in neighborhoods in Homs and Damascus – and called on the Government and opposition groups to resist provocations that could undermine peace efforts.

In a statement from his spokesperson in New York, Mr. Ban called the attacks “horrendous acts of terror against innocent civilians” and reiterated that no one can achieve a military victory in the Syrian conflict.

He urged all Syrian and international actors to “put their differences aside” and to “exercise humility and bravery” to work together to stop the violence and achieve a political solution to the “heart-breaking situation in Syria.”

That sentiment was echoed later in the day by UN Emergency Coordinator Valerie Amos, who told reporters after briefing the Security Council that the founding values of the UN and the responsibility of a State to look after its own people are being violated every day in Syria.

“I think the onus rests on the Council to not only recognize that reality, but to act on it,” she summarized.

A car bombing and mortar shelling yesterday in the Zahra neighbourhood in central Homs killed and wounded dozens of people.

The Secretary-General again appealed to all parties “to at last live up to their responsibility under humanitarian law and stop targeting civilian areas”, including through aerial bombardments and barrel bombs.

The attacks come amid the ongoing cease-fire negotiations over the Old City of Homs, where at least one million of the estimated 2.5 million population in need of urgent humanitarian assistance. The city is surrounded on all sides, according to the UN, impacting all facets of daily life.

Following her briefing to the Council, Ms. Amos said she is extremely concerned by the intensified violence with parties “engaged in an endless spiral of targeting and harming civilians for tactical purposes.”

She noted that the most fundamental provisions of human rights and humanitarian law continue to be violated by all parties.

Two months after the Council adopted a resolution focused on humanitarian access to besieged and hard-to-reach areas, including across conflict lines and across borders, and the expansion of humanitarian relief operations – “the situation is getting worse”, Ms. Amos told journalists at the UN Headquarters in New York.

“I told the Council that in my reports I have demonstrated time and time again the minimal impact of the approach being taken so far, and that public pressure and private diplomacy has yielded very little,” she said. 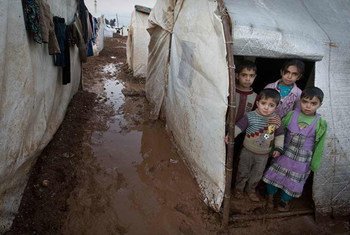 23 April 2014
Calling urgently on Syrian authorities and the opposition to allow aid access, end siege warfare and halt the indiscriminate bombing of civilians, the top United Nations humanitarian officials today also issued a strong challenge to “those with the responsibility, power and influence” to find the courage to re-energize a thus-far failed diplomatic push to end the brutal three-year conflict.