“The Second LLDC conference is expected to deliver an outcome document that is forward looking, comprehensive and focused. I strongly urge all Member States and stakeholders to actively and meaningfully engage in the process,” said Mr. Acharya, who is the UN High Representative for the Least Developed Countries, Landlocked Developing Countries and Small Island Developing States

On 22 April, the UN General Assembly adopted the resolution on convening the conference, as well as its preparatory meetings.

The preparatory process for the conference has already gained momentum. Last year all three regional reviews (Euro-Asian, Africa, Latin America) were organized by the UN regional commissions in close collaboration with the Office of the High Representative (UN-OHRLLS).

The meetings presented an opportunity for a frank assessment of the implementation of the Almaty Programme of Action, a set of goals put in place in 2003 to tackle the particular challenges faced by these countries owing to a lack of direct access to the sea.

More than a dozen pre-conference events held since 2012 in several capitals across the world have focused on developmental issues of crucial importance to LLDCs, including international trade facilitation, aid for trade, infrastructure financing, the impact of climate change, desertification, information and communication development, and priorities for the development agenda of LLDCs.

Mr. Acharya has stressed that transit countries and development partners were integral to the successful outcome of the Vienna meeting.

“With the support and cooperation of transit countries and development partners, the conference should contribute towards ensuring smooth transit arrangements, enhanced trade facilitation and infrastructure development so that LLDCs would be able to accelerate inclusive growth and ensure sustainable development for all,” he said in press release.

“As it is taking place this year, I am confident that its outcome would also be fully taken into account in the formulation of the post 2015 development agenda,” added the High Representative.

The conference will be preceded by two sessions of the intergovernmental preparatory committee, proposed to be held, respectively, 12 -13 June 2014, and 2-3 October 2014, both at UN Headquarters in New York.

All Governments and stakeholders are invited to attend the preparatory committee sessions and participate in the conference at the highest level possible.

There are 32 countries classified as landlocked developing, 16 of which are located in Africa, 10 in Asia, 4 in Europe and 2 in Latin America.

Lack of territorial access to the sea, remoteness and isolation from world markets and high transit costs continue to impose serious constraints on their overall socio-economic development. 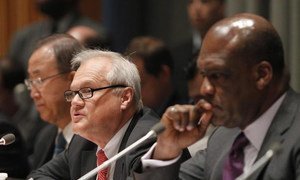 The United Nations took a major step on the road towards crafting a new, sustainability-focused agenda, as two of the Organization’s main bodies – the General Assembly and the Economic and Social Council (ECOSOC) – brought Member States together to weigh action-oriented solutions for mobilizing new and existing development partnerships.