As the international community marks the 28th anniversary of the Chernobyl nuclear disaster, Secretary-General Ban Ki-moon is calling for greater support for the process of recovery and sustainable development in the affected area, and efforts to prevent any future nuclear disasters.

“This is an opportunity to pay tribute to the emergency workers who responded, remember the more than 330,000 people who were evacuated from contaminated regions, and stand in solidarity with the millions who still live in the affected areas in Belarus, the Russian Federation and Ukraine,” said a statement issued by the spokesperson for the Secretary-General.

The explosion that occurred at Chernobyl on 26 April, 1986 marked the worst nuclear power plant accident in history. The United Nations has played an important role in addressing the challenges faced by affected communities, and remains committed to the UN Action Plan on Chernobyl until 2016.

The Plan contains a declaration of principles embraced by all UN agencies involved in recovery efforts and emphasizes social and economic development and the promotion of healthy lifestyles and community self-reliance.

“Those affected still require targeted yet comprehensive support in creating new livelihoods and restoring self-reliance and self-sufficiency. The Secretary-General applauds the determination of people in affected territories to bring life in the region back to normal,” said the statement.

Mr. Ban noted that Chernobyl recovery has produced new knowledge and experience in addressing the multifaceted consequences of nuclear emergencies.

“Over the years, the United Nations and its partners have tackled development challenges that emerged in the aftermath of the nuclear disaster, supported recovery efforts tailored to addressing the fallout, and found practical solutions on the ground,” the statement noted, adding that Mr. Ban welcomes the request of the General Assembly to fully utilize those experiences in development cooperation worldwide.

“On this solemn occasion, the Secretary-General calls upon the international community to further support the process of recovery and sustainable development in the Chernobyl-affected region, to optimize the knowledge gained for the common good, and to do everything possible to prevent any future nuclear disasters.” 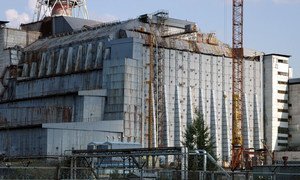 On Chernobyl anniversary, UN chief says impact of disaster must never be forgotten

Secretary-General Ban Ki-moon today marked the 27th anniversary of the worst nuclear power plant accident in history by stressing that the impact of the Chernobyl disaster must never be forgotten and calling for continued international assistance for the people and regions affected.