24 April 2014
Stepped-up rebel attacks, clashes fuelled by local political rivalries, and mass displacement sparked by the abuses of a pro-Government militia have again left long-troubled Darfur at a crossroads, said the United Nations peacekeeping chief today, appealing to the Security Council and its African Union (AU) counterpart for political support to move the warring factions towards lasting peace.

“Once again, Darfur finds itself at a crossroads. Since the beginning of 2014, new dynamics have emerged, with considerable impact on the civilian population,” said Hervé Ladsous, Under-Secretary-General for UN Peacekeeping Operations, as he briefed the Council on the latest developments in the strife-torn western region of Sudan, as well as on the work of the joint AU-UN mission there, known as UNAMID.

Mr. Ladsous said Darfur is currently experiencing renewed violence after a relative lull, marked by massive movements of displaced persons and by very “notable and strong discord” among local allies of the Sudanese Government.

The growing political rivalries were most evident in North Darfur. “At stake is not merely the local government, but also the hoarding of mineral resources, [particularly] gold deposits.” All of this has led to fighting between the groups and serious loss of civilian life. Moreover, he explained that the “very difficult” regional context is aggravating the situation.

Further complicating matters are the ongoing activities of the pro-Government militia known as the Rapid Support Force (RSF), which contributes to further endangering civilians, exposing them to “significant risks” particularly in North and South Darfur. Mr. Ladsous said that the violence and abuse attributed to the militia include, among others, targeting of civilians, burning and pillaging of villages, and cattle rustling.

At the same time, the rebel groups that have not signed the Doha Document for Peace in Darfur (DDPD) have stepped up their attacks against Government positions, particularly in the Jebel Marra area of North Darfur, and sporadically in parts of South Darfur. In response, the Sudanese armed forces have likewise stepped up their operations, including employing aerial bombings, which have led to the death and displacement of civilians.

Describing the terrible impact of one such operation carried out by the Sudanese army and the RSF militia on 19 and 27 February in an area known as Um Gunya, located some 50 kilometres southeast of Nyala, Mr. Ladsous said that, according to the UN Office for the Coordination of Humanitarian Affairs (OCHA), between 40,000 and 50,000 civilians were forced to flee the area.

“All of this has led to a deterioration of the humanitarian situation in Darfur. OCHA believes that the number of persons displaced since January exceeds some 370,000,” he said, adding that two-thirds of those persons remain unable to return to their homes.

In all, there are estimated to be more than 2 million IDPs in Darfur, making this humanitarian crisis one of the most significant in the world. While the majority of those newly displaced have received some form of assistance, the restrictions on movement imposed by the warring factions have not allowed relief aid to reach them quickly enough or in sufficient quantity.

“Those same restrictions have hampered UNAMID from discharging its duties as we would have wanted regarding the protection of civilians given the growing insecurity,” Mr. Ladsous said.

“It seems that this situation should lead us to modify our response,” he said, particularly noting the need to strengthen cooperation at different levels and in various contexts – between the AU and UN; between the UN and the Sudanese Government; and between UNAMID and the UN Country Team.

“All of this should be intensified in order to better support the activities of UNAMID,” said Mr. Ladsous, stressing that mediation efforts should enjoy all necessary political support and the consistent involvement of the main actors towards a constructive dialogue that will lead to lasting peace.

In all this, the political support of the Security Council, the AU Peace and Security Council and the Joint Mediator should move towards convincing the parties to undertake joint negotiations and rebel movements to re-joining the peace process. “Right now, this is more important than ever before,” he declared.

The peacekeeping chief said that in such a challenging environment, UNAMID has focused on concrete actions and measures reflecting its strategic priorities, which include mediation between non-signatories to the DDPD and the Government; support to mediating inter-communal conflict; and civilian protection.

To that end, he welcomed the recent proposal put forward by Joint Chief Mediator and head of UNAMID Mohamed Ibn Chambas to develop, together with the AU, a common framework for political negotiations within the context of the national dialogue. Mr. Ladsous said steps have also been taken to strengthen and streamline the Mission. A work plan has also been developed, the implementation of which is being monitored on a bi-weekly basis, including with the UN Country Team. 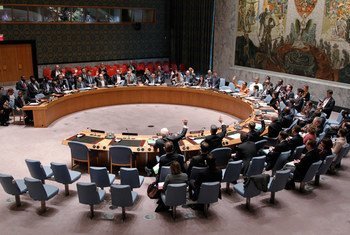 3 April 2014
Deeply concerned at the “considerable deterioration” of the security situation in Darfur over the past year, marked by ongoing clashes between the Sudanese Government and rebels, and an upsurge in inter-communal violence, the United Nations Security Council today endorsed Secretary-General Ban Ki-moon’s revised strategic priorities for the joint African Union-UN mission in the long-restive western region of Sudan.