The United Nations Mission in the Democratic Republic of the Congo (DRC) will provide technical and logistical support for upcoming elections, the top UN official in the country today confirmed, stressing that the planning for the polls must be well organized and well-funded.

During a visit at the Independent National Electoral Commission (CENI), Special Representative of the Secretary-General Martin Kobler also stressed the need for elections to be properly funded and planned.

The November 2011 presidential and parliamentary elections were marred by violence between members of political parties in almost all of the provinces of the vast African nation.

The UN registered 345 violations committed during the 2011 electoral period, affecting at least 769 victims, including the deaths of at least 41 individuals, according to the UN Joint Human Rights Office (UNJHRO) which includes MONUSCO.

Mr. Kobler, who heads the UN Mission in the country known as MONUSCO, also stressed that the local, provincial and national elections – due to take place between 2014 and 2016 – must be well planned.

“I bear in mind Afghanistan’s and Iraq’s experiences,” the UN official who held senior positions with UN political missions in both those countries. “It takes several months to plan such operations.”

To gather the necessary budget, Mr. Kobler said the UN has a task force chaired by MONUSCO deputy Moustapha Soumare on the logistic issues.

“It is in the best interest of MONUSCO to bring its support to the electoral operations, to provide good offices and to maintain good relations with all political parties, both opposition and majority,” said Mr. Kobler.

As part of the Mission mandate agreed upon by the UN Security Council, MONUSCO is to provide technical, logistical and financial support to the Electoral Commission in order to ensure a sustainable electoral process during the entire electoral cycle. 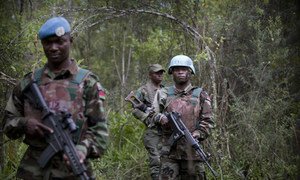 The Security Council today extended for one year the United Nations Organization Stabilization Mission in the Democratic Republic of the Congo (MONUSCO) – along with its Intervention Brigade – noting the need for the Mission to strengthen its support so the Congolese Government can address security challenges in line with the aims of a regional peace and security accord.