23 April 2014
A United Nations human rights expert today called on authorities in Côte d’Ivoire to undertake broad consultations on the reform of the Independent Electoral Commission (IEC) to prevent the country from “falling back into crisis.”

The call by Doudou Diène, the Independent Expert on the situation of human rights in Côte d’Ivoire, follows the recent adoption by the Government of a bill on the IEC’s composition, organization, powers and functioning, in response to a specific recommendation from the expert.

“The adoption of the draft bill on the reform of the Electoral Commission constitutes an important initial step in the consolidation of democracy in Côte d’Ivoire,” Mr. Diène stated in a news release. “This reform must contribute to the national reconciliation process and reinforce the re-launching of the political dialogue.”

He noted that the IEC will be in charge of the 2015 presidential elections, which should constitute “the ultimate test” of sustainable democratic reconstruction and reconciliation.

A 2010 presidential election, meant to be the culmination of the peace process in the West African country that was split by civil war in 2002, resulted in months of violence when Laurent Gbagbo refused to step down after losing to Alassane Ouattara. Mr. Gbagbo finally surrendered the following April.

Ahead of next year’s polls, Mr. Diène has stressed the need to overhaul the IEC, saying that it does not reflect the reality of the political landscape of Côte d’Ivoire.

“If there is to be a resurgence of a dialogue in Côte d’Ivoire, the fundamental institutional problems that resulted from the elections must be resolved,” he stated. “Consensus must be reached on the mapping of electoral districts, on voters’ lists and on the composition of the Independent Electoral Commission.”

To consolidate “the democratic dynamic” currently under way and create conditions conducive to the holding of peaceful and credible presidential polls, he also highlighted the need to continue the inter-Ivorian dialogue and establish a legal status for the political opposition.

“The bill on the reform of the Electoral Commission, expressing the Government’s view, should be submitted to broad and open consultations with all the political actors and civil society representatives,” he stressed.

“The democratic and consensual reform of the IEC constitutes the most credible test, to the Ivorian people and the international community, of the willingness and the ability of the Ivorian politicians to draw all the political and moral lessons of the crisis and to build together national reconciliation.” 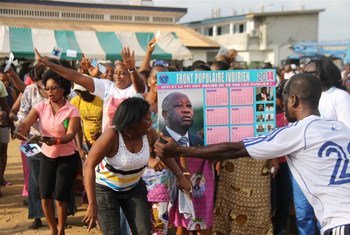 27 March 2014
The United Nations independent expert tasked with assessing the human rights situation in Côte d’Ivoire, expressed concern over unresolved issues in the national reconciliation process as the country prepares for presidential elections next year, and stressed that “impartial justice for all” is the key to stability and recovery from the unrest after the disputed 2010 disputed.