Secretary-General Ban Ki-moon today voiced his shock and sadness after a bomb attack at a bus station near the Nigerian capital of Abuja claimed dozens of lives, and called for the perpetrators to be brought to justice.

More than 70 people have reportedly been killed in the bombing, which took place as commuters were about to board buses and taxis to go to work in the capital. Over 100 people are said to be injured in the attack.

“The Secretary-General is shocked and saddened by the many lives lost today,” his spokesperson said in a statement, adding the United Nations chief’s condolences to the bereaved families and to those injured.

“The Secretary-General strongly condemns all indiscriminate killings and acts of violent extremism,” the statement added. “The perpetrators of this attack, and those responsible for the continuing brutal attacks in the northeast of the country, must be brought to justice.”

Later in the day, the members of the Security Council also strongly condemned the multiple terrorist attacks committed by Boko Haram that occurred in Nigeria on 13 and 14 April, causing numerous deaths and injuries.

In a statement issued in New York, the Council reaffirmed that terrorism in all its forms and manifestations is criminal and unjustifiable, regardless of its motivation, wherever, whenever and by whomsoever committed, and should not be associated with any religion, nationality, civilization or ethnic group.

The members of the 15-nation body underlined the need to bring perpetrators, organizers, financiers and sponsors of these reprehensible acts of terrorism to justice, and urged all States, in accordance with their obligations under international law and relevant Council resolutions, to cooperate actively with the Nigerian authorities in this regard. 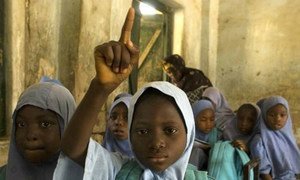 Concerned about the escalation of acts of terrorism in north-eastern Nigeria, including along the border with Cameroon, the head of the United Nations Office for West Africa (UNOWA) today strongly condemned the latest wave of “unspeakable” violence in the region and demanded an end to attacks targeting innocent civilians.