14 April 2014
More than 70,000 people are now living in horrendous conditions crammed into the Central African Republic (CAR) Bangui airport – the lucky ones under weather-beaten tarps just yards from the runway. Others are in the open.

“Like its stranded airport refugees, the Central African Republic is in dire need of a ticket out of its misery,” United Nations Secretary-General Ban Ki-moon said in an op-ed today for The Washington Post on his recent trip to the country, where a 2012 rebel-led coup has given way to brutal sectarian violence and massive human rights violations that have in turn displaced hundreds of thousands of people and left 2.2 million- half the population- in need of humanitarian aid.

While protected by international troops, the displaced people are exposed to disease, malnutrition and untold horrors beyond the gates.

Food is scarce, malaria could spread and the rainy season will only exacerbate the problems.

“Women and men shared horrific accounts of gang rapes, extortion and brutality. One mother told me how young children have suddenly begun imitating adults with weapons,” elaborated the UN chief.

The past year has brought, in quick succession, the violent overthrow of the Government, the total collapse of State institutions and a descent into lawlessness and sectarian brutality.

Mr. Ban attested, “the implosion of the State has created a set of challenges that is undermining stability and security across an already-fragile region.”

As most of CAR’s minority Muslims have fled, ethno-religious cleansing is changing the country’s landscape.

“I met hundreds outside the Central Mosque in the devastated PK5 neighborhood of Bangui. The road outside was lined with trucks laden with their last possessions,” Mr. Ban said. 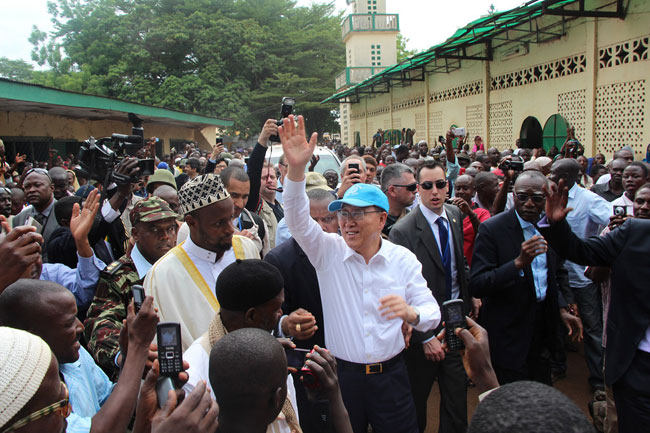 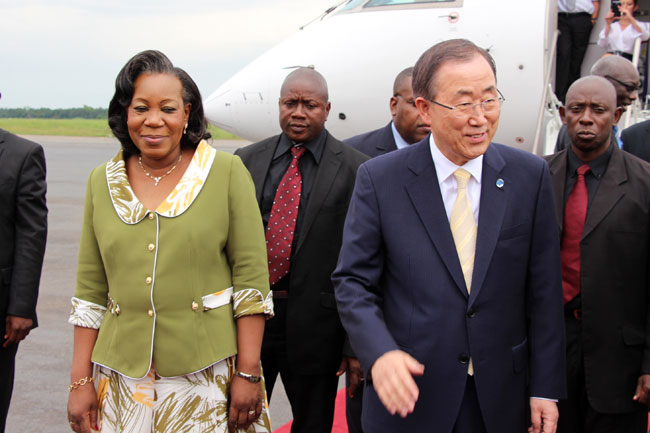 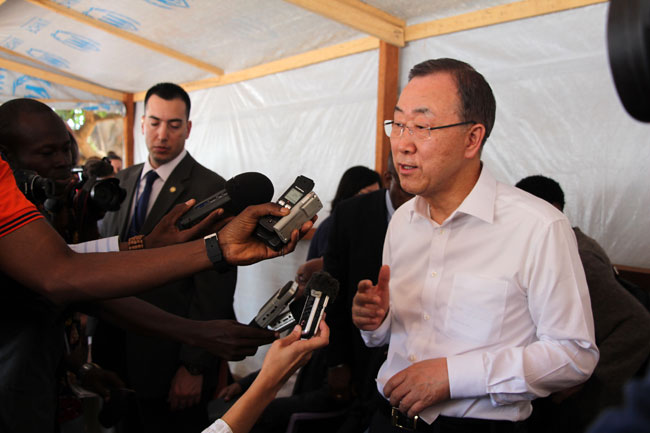 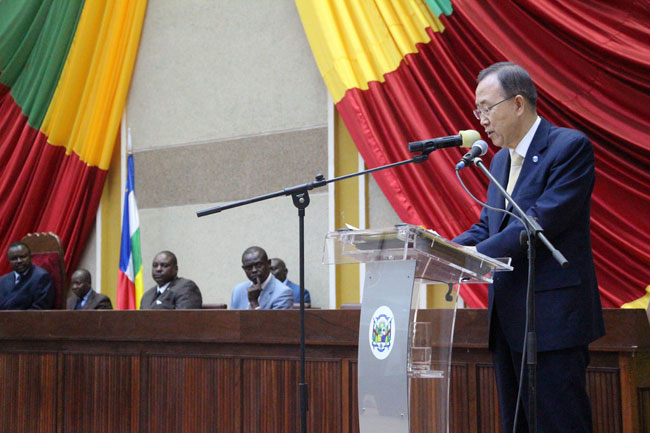 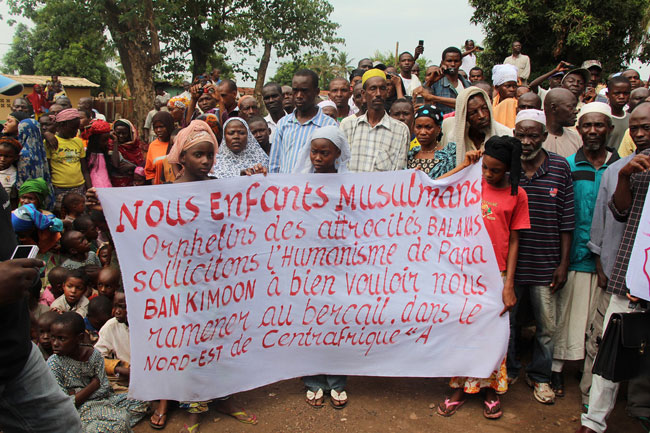 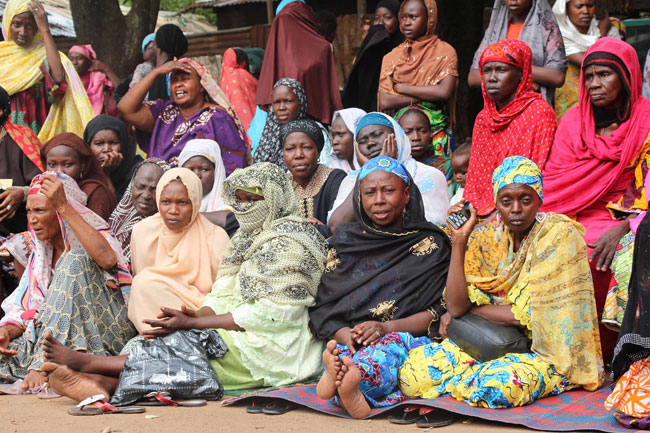 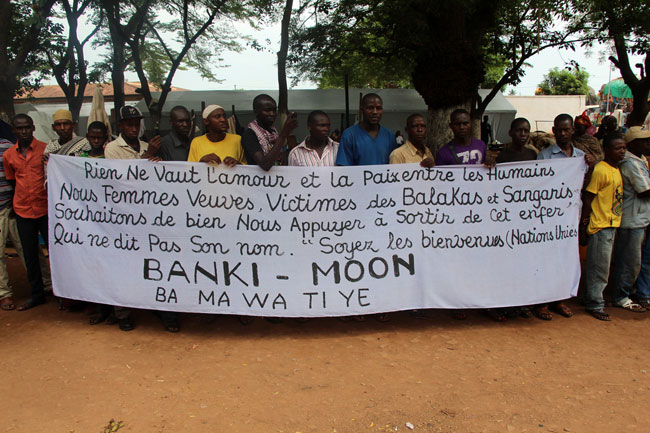 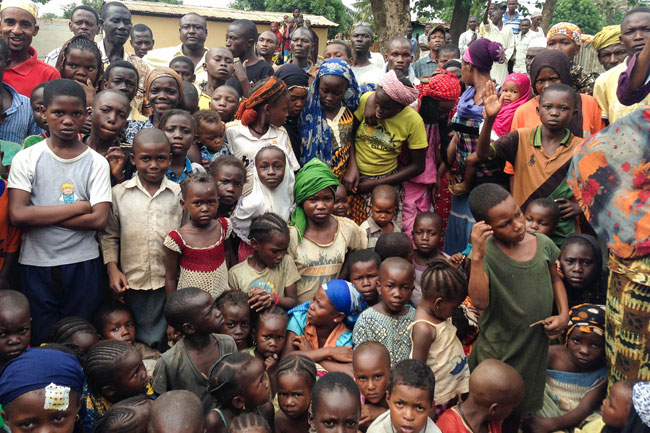 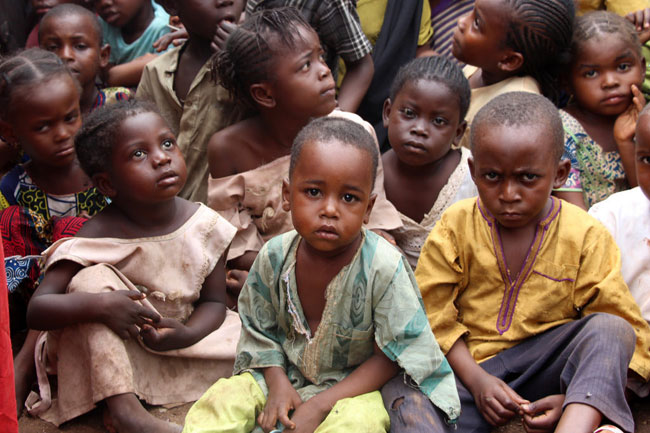 Secretary-General Ban Ki-moon visited the Central African Republic on 5 April to shine a light on the crisis in the country. He met both with internally displaced people and representatives of the National Transitional Council. Photos: BINUCA/Balepe Mokosso Dany

In a few scattered places, vulnerable communities have gathered in camps and protected zones – but they are in danger of attack and seized with one sole objective of escaping.

On veut la partition, read the signs: We want partition.

One young man explained that while they did not want to leave, they wouldn’t stay simply to die.

“People should not have to beg for partition in order to feel safe,” argued the Secretary-General.

In a country the size of Texas, about 8,000 African Union (AU) and French troops are all that stand between order and anarchy.

The Security Council has just approved the deployment of 10,000 troops and almost 2,000 police for a new United Nations peacekeeping mission for the Central African Republic.

This is a welcome and highly anticipated step by the Central Africans, but the mission will not fully deploy until September – and time is not on the side of the vulnerable.

“More security assistance is needed during this vital intervening period before the peacekeeping mission is fully operational,” Mr. Ban explained.

Until the UN peacekeepers are deployed, support for the AU and French forces is crucial. The Secretary-General has urged the European Union to provide troop reinforcements, which have already begun.

“Action must come on two other fronts as well,” said Mr. Ban.

The transitional Government needs immediate help, including support for getting police, judges and prison guards back to work.

At the same time, the country needs an inclusive political process to find the path to peace.

The UN chief exhorted, “accountability for atrocious human rights violations is central. The United Nations has sent a commission of inquiry to help advance the process. Religious leaders are also crucial to advancing dialogue and ensuring that evacuated people can return home.”

Mr. Ban travelled to the CAR en route to Rwanda for the 20th anniversary of the genocide.

“Before leaving, I told the Central African Republic leaders that they must heed the lessons of that epic tragedy, not repeat its mistakes,” Mr. Ban said.

One of the religious leaders spoke of the many difficulties facing the country, sharing his fear for the future.

“As I saw in Rwanda, communities that have gone through massive national trauma can learn to live together once more in relative harmony,” the Secretary-General said.

Mr. Ban made the case that Central Africans rekindle that spirit.

“With the support of the international community, the people of the Central African Republic can build a future of reconciliation and peace,” he said.

According to Mr. Ban, the international community has an opportunity to help – and an obligation to act. 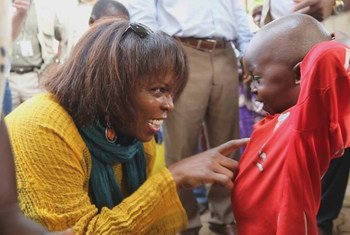