14 April 2014
The United Nations human rights chief today condemned the rampant use of torture, including allegedly of children, in detention facilities across Syria by Government forces and some armed opposition groups.

“In armed conflict, torture constitutes a war crime. When it is used in a systematic or widespread manner, which is almost certainly the case in Syria, it also amounts to a crime against humanity,” said High Commissioner for Human Rights Navi Pillay.

“I urge the Government and armed opposition groups in Syria to immediately halt the use of torture and ill-treatment, and to release all those who have been arbitrarily detained in conditions that clearly breach international human rights standards. Those detained must be treated humanely.”

The comments come as her office (OHCHR) issued a paper containing detailed testimony from victims and witnesses, describing a broad pattern of torture and ill-treatment against individuals in Government facilities, as well as documenting reports of torture by some armed groups.

The analysis is based on interviews by OHCHR with individuals who have spent time in detention facilities in Syria during the conflict.

“Upon arrival at a detention facility, detainees are routinely beaten and humiliated for several hours by the guards in what has come to be known as the ‘reception party’,” the paper states, citing accounts of torture and ill-treatment by various components of the Government’s security apparatus.

“Men, women and children have been routinely picked up from the street, their homes and workplaces, or arrested at Government-manned checkpoints,” it adds. “Many are activists – often students – as well as lawyers, medical personnel and humanitarian workers, and some just happened to be in the wrong place at the wrong time.”

A 30-year-old university student described how he was beaten, how his beard was pulled out in clumps, his feet burned and his toenails torn off with pliers at an Air Force Intelligence facility in Hama, where he was interrogated daily for more than a month.

Two victims, a man and a woman, described the use of sexual violence against them. One 26-year-old woman told of repeated night-long interrogation sessions, during which she was beaten with electric cables and had her teeth pulled out. On one occasion, a security officer took her and another woman to a room where they were raped.

The paper also makes reference to cases of individuals who died in detention, in circumstances which suggest that torture was the cause.

“Occasionally, families are asked to sign papers stating that their relative was killed by armed opposition groups, and to immediately and discreetly bury the body,” it states.

Reports of torture by armed opposition groups appear to be on the rise since 2013, particularly in Al Raqqa, northern Syria, the paper states, although documenting allegations against such groups is particularly challenging due to constantly evolving alliances and changes in memberships, power structures and areas under their control.

Former detainees described abhorrent conditions in Government detention centres, including one case where 60 people were crammed into one cell, with a hole in the corner to be used as a toilet. One 60-year-old man who spent three months in different detention centres described how, every day, “cellmates were taken for 30 or 45 minutes of interrogation and came back with their faces bleeding, barely able to walk, and with open wounds that remained untreated and became infected.”

Ms. Pillay stressed that international law unequivocally prohibits the use of torture, at all times and under all circumstances.

She said it was crucial that those in positions of authority publicly condemn the use of torture and other ill-treatment and ensure that those found guilty of perpetrating torture are held accountable. She stressed that all victims of torture and ill-treatment should be provided with redress, including fair compensation and rehabilitation.

The High Commissioner also reiterated her request to the Government to allow regular and unannounced access to all detention facilities to impartial international observers, including her office, the Commission of Inquiry on Syria and relevant UN independent human rights experts, to enable them to effectively monitor the situation. 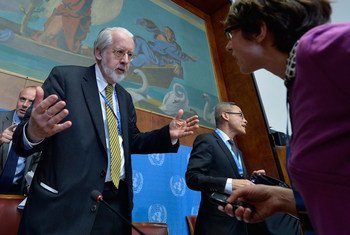 18 March 2014
As the Syrian war enters a fourth year, the harrowing violence shows no signs of subsiding – the fighting has driven some nine million civilians from their homes and has reduced many of those who remain to scavenging – said the head of a United Nations-appointed human rights panel, denouncing the international community’s inaction in the pursuit of peace and accountability.