While Africa has recorded impressive economic growth in the past decade, more credible industrial policies and institutions are needed to advance the structural transformation of the continent, says a new report released today by the United Nations and the African Union.

This year’s Economic Report on Africa, jointly produced by the UN Economic Commission for Africa (ECA) and the African Union (AU), adds that transforming Africa’s industrial landscape has failed partly because countries used industrial blueprints characterised by lack of dynamism and high level coordination, as well as inadequate consultations with stakeholders.

The report, launched at UN Headquarters in New York, builds on the work of the 2011 edition – on the role of the state in economic transformation – as well as last year’s report on leveraging Africa’s comparative advantages in commodities to industrialize.

The report tries to “dig deeper” and demonstrate that, to succeed, “industrial policy has to be organic, it has to be contextualized, it has to be specifically African,” ECA Executive Secretary Carlos Lopes said in an interview with UN Radio.

In addition, for Africa “to really make it” in terms of industrialization, it has to draw from the lessons of other emerging countries and regions.

Mr. Lopes noted that gross domestic product (GDP) on the continent has doubled in the last 10 years. At the same time, there are not enough modern jobs being created, he noted.

“We need what we are calling transformation… We are making the case that the only option for Africa to do it is through industrialization.”

Until now, according to the report, an examination of Africa’s failure at industrialization had ignored the policy processes and institutions governing industrial policy in Africa or the impact of their inherent weaknesses on industrialization.

“Indeed, weak institutional structures and poor policy design have been at the root of Africa’s industrial policy problem throughout its post-independence history,” the report declares.

While acknowledging Africa’s impressive economic growth in the past decade on the back of better commodity prices, improved governance and increasing domestic demand and trade and investment ties with emerging economies, the report says that industrialization is a “precondition for Africa to achieve inclusive and sustainable economic growth.”

Regarding the provision of modern infrastructure and logistics necessary for industrialization, the report wants governments with few resources to create “pockets of infrastructure” focused on sectoral or clustering needs of industrial expansion.

The report also recommends industrial parks as one approach which “provides high potential for growth and value addition as well as for solid linkage development and related spillovers among companies, suppliers and service providers.”

♦ Receive daily updates directly in your inbox - Subscribe here to a topic.
♦ Download the UN News app for your iOS or Android devices.
Africa|industrial 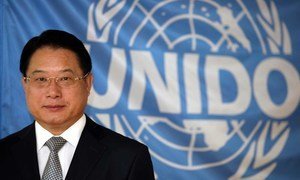 The head of the United Nations Industrial Development Organization (UNIDO) has stressed that the agency’s strong focus on inclusive and sustainable industrialization can help bolster the continent’s efforts to achieve long-term growth and development.