FAO/Johan Spanner
A man sells potatoes in the street outside the central market in Yerevan, Armenia.
1 April 2014

The United Nations Food and Agriculture Organization (FAO) paints a picture of persistent nutrition problems due to vitamin and mineral deficiencies, and stunted growth in its latest snapshot of the Europe and Central Asia.

On the eve of its biennial Regional Conference for Europe – in Bucharest, Romania – FAO concludes that although caloric intake in the 53-country region should see hunger fall to less than 1 per cent by 2050, nutrition problems continue in some of the countries today.

“Caloric intake as a measure of undernourishment is currently not the major problem,” reveals the document.

For many countries a more significant problem is the lack of adequate micronutrient intake and the sub-optimal quality of diets, often ranking lower than other regions of the world.

Raimund Jehle, Senior Field Programme Officer in FAO’s Regional Office for Europe and Central Asia spells out that many diets are deficient in micronutrients, “like iron, copper or vitamins.”

Across the region, two countries have yet to reach targets aimed at cutting under-nutrition in half by 2015: the first 2001 Millennium Development Goal and the 1996 World Food Summit goal.

Additionally, 5 per cent of undernourishment still exists in three countries today and a comparatively high rate of childhood stunting is found in two countries.

In the Caucasus and Central Asia, stunted children under age five is more than three times higher than in the European Commonwealth of Independent States (CIS) – where the figure stands at 6 per cent.

“Undernourishment is related to the status of poverty,” said Mr. Jehle.

In a positive trend for improved dietary diversity and quality, the paper notes that fruit and vegetable production in Caucasus and Central Asia is on the rise.

Turning to obesity, FAO notes that almost 48 per cent of people in the Caucasus and Central Asia countries, and more than 50 per cent in both the European CIS and South-eastern European countries were overweight or obese by World Health Organization (WHO) standards.

The paper cautions the risk of overweight as increasing diet-related diseases and straining healthcare facilities, particularly in countries with fewer financial resources.

High reliance on imports makes these countries more vulnerable to fluctuations in international prices, or to the level of their export earnings.

At the consumer level, an average of 30 per cent of household budgets in these countries is spent on food – compared to 10 per cent in Germany or 13 per cent in Czech Republic – with the poorest families spending up to 70 per cent of their income.

Looking forward, the paper projects that prospects for human health and development across the 18 countries it covered depend largely on the policy choices of national Governments.

The central recommendation is clear: “The focus of governments needs to be on developing and implementing a comprehensive approach to the revival and development of the agricultural and rural sector.”

The paper recommends some key ingredients for national recipes to improve food security and nutrition including, among others, a policy focus on smallholder producers in order to reduce rural poverty, increase output and improve agricultural competitiveness; shifting away from extensive production and reliance on one or two commodities; overall economic growth; avoiding consumer subsidies and price controls; trade and international cooperation; and a strong science and technology system that stimulates agricultural innovation. 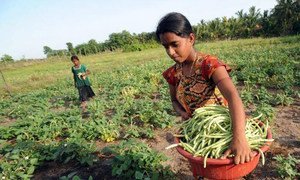 The United Nations today stressed that Governments in Asia and the Pacific – which has more hungry people than all the other regions of the world combined – should take some major decisions soon about ways to increase food production and address undernourishment.