Secretary-General Ban Ki-moon addresses the International Conference for the Prevention of Genocide, being held in Brussels

1 April 2014
Addressing the International Conference on Genocide Prevention in Brussels, United Nations Secretary-General Ban Ki-moon today declared that defending human rights is a global responsibility, and called on all Governments to renew their commitment to vigilance and political will to prevent any mass atrocities from ever occurring again.

“We pay tribute to the memory of victims through remembrance and reflexion. But it is perhaps through our prevention and protection efforts that we honour them even more,” said the UN chief.

In his speech, Mr. Ban commended the progress that has been made in holding accountable genocide perpetrators, citing the establishment of special international criminal tribunals for Rwanda, former Yugoslavia, Sierra Leone and Cambodia as “breakthroughs against impunity” and proofs that “the rule of law keeps gaining ground.”

He also drew attention to some of the international community’s past failures in preventing genocide, citing the Security Council’s decision to withdraw the UN peacekeeping operation in Rwanda 20 years ago, “thereby taking away the sorely needed international ‘eyes and ears’ on the ground.”

“The UN was also deeply tarnished by its actions and inactions at Srebrenica,” he added, stressing that the Organization has been working hard “to draw on the lessons of those failures.”

“My Special Adviser on the Prevention of Genocide, Mr. Adama Dieng, and my Special Adviser on the Responsibility to Protect, Ms. Jennifer Welsh, scan the world for signs of the precursors of genocide and atrocity crimes, sound the alarm when necessary and work with countries and regions to enhance prevention,” Mr. Ban explained.

“They continue our efforts to operationalize this principle, a milestone on its adoption almost a decade ago.”

The UN chief described how the Organization has put prevention at the forefront of its efforts, notably through the ‘Rights Up Front’ exercise. “Rights Up Front aims to improve prevention through an intense and early focus on human rights violations,” he said, adding that this approach was drawn from the case of Sri Lanka and that “it obliges those within the Organization to be frank in telling Member States what they need to hear, rather than what they might want to hear, about serious violations and emerging crisis situations.”

“The Rights up Front approach has been on display in recent months in South Sudan, where the United Nations opened the gates of its peacekeeping installations, offering shelter to people fleeing violence,” Mr. Ban said.

Stating that “20 years ago, such steps would have been unthinkable,” the Secretary-General noted that today, they were taken “as a deliberate matter of policy – a lesson of Rwanda made real.”

Mr. Ban went on to say that though “the situations remain fragile and tense” and “these acts of protection could prove unsustainable,” the broad thrust remains clear: “More protection, not less; a greater sense of responsibility to act, not less; and ultimately, earlier action, well before situations spin out of control.”

Emphasizing that “no part of the world can consider itself immune to the risk of genocide,” the UN chief listed some of the conditions necessary to support the prevention of such crimes against humanity: establishing legitimate and accountable national institutions that are inclusive and credible in the eyes of the population, ensuring that the rule of law is respected and that all human rights are protected without discrimination, eliminating corruption, managing diversity and supporting pluralistic media and strong civil society, including human rights defenders.

“I applaud those Member States that have put in place national institutions that focus on the prevention of genocide and other atrocity crimes. I urge others to follow suit and do even more,” said the Secretary-General, commending the efforts States have made to share best practices and strategies. “Slowly but surely, we are seeing the emergence of a community of commitment for the prevention of atrocity crimes,” he noted.

Despite these encouraging signs, the UN chief highlighted that the biggest challenge of all remains the mobilization of political will. In a world where atrocity crimes are of the realm of global concern, Mr. Ban deplored that “the international community often proves reluctant to act, at times even when atrocity crimes are happening.

The reasons may vary, from competing definitions of national interest, to the complexities and risks of a given situation, to a perceived lack of capacity. There may be little appetite for new financial or military commitments.”

“But is that sufficient reason to look away? Is that not merely an echo of what we heard twenty years ago?” he asked.

Describing the conflicts in Syria and the Central African Republic as “nightmares for the vulnerable, most directly affected,” Mr. Ban also cited them as “a challenge to everything we have put in place – the pledges, the mechanisms – to exercise our collective responsibilities to prevent such crimes from happening or recurring.”

“All of us should be thinking about what more we can do about the atrocity crimes taking place before our eyes – and what more we can do, much earlier, to keep societies from splintering and descending into destruction and violence,” pleaded the UN chief.

Later in the day, Mr. Ban met with Belgian Prime Minister Elio Di Rupo and the two exchanged views on a number of pressing crises and global concerns, including Syria and the situation in Ukraine, agreeing on the urgent need for a political solution – and the value of ongoing efforts to de-escalate tensions, support dialogue and monitor developments.

The UN chief said they also discussed the humanitarian and political situation in the Central African Republic, the Democratic Republic of the Congo, and in Burundi.

Mr. Ban appreciated Belgium’s support for the Government and other Burundian stakeholders in resolving all differences peacefully and ensuring a level playing field for next year’s election.

They two also discussed climate change, which both agreed demands urgent action. Mr. Ban invited the Prime Minister to the climate summit he will convene on 23 September in New York to pave the way for an ambitious, legal climate agreement by 2015.

In addition, the Secretary-General said he is confident that Belgium will continue to show leadership at this critical time, and thanked the Prime Minister for his leadership in convening the International Conference on the Prevention of Genocide marking the twentieth anniversary of Rwanda’s genocide. 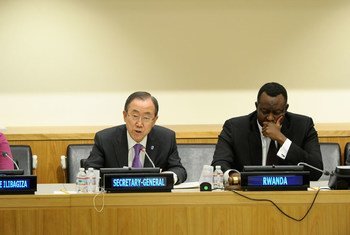 27 February 2014
Ahead of the twentieth anniversary of the genocide in Rwanda, Secretary-General Ban Ki-moon today honoured the launch of “Kwibuka 20,” a series of events commemorating the tragedy, and urged the international community to do more to fully internalize and implement the lessons learned from the killings of 800,000 people in 1994.