Secretary-General Ban Ki-moon has urged the Government of Myanmar to ensure the safety and security of all staff members and their property in the wake of recent attacks against the United Nations and international non-governmental organizations (NGOs) in Rakhine state.

In a telephone conversation on Sunday with President Thein Sein, Mr. Ban stressed that impunity cannot be tolerated in the context of Myanmar’s reform process and called for the protection of all civilians and the full respect for the rule of law.

He also welcomed the initial measures undertaken by the authorities so far, according to a read-out of the call provided by the Secretary-General’s spokesperson.

The conversation comes following the attacks by unidentified groups of demonstrators last week on the premises of the UN and NGOs working in Sittwe, the capital of Rakhine state, which has witnessed waves of violence between Buddhists and Rohingya Muslims.

Mr. Ban’s spokesperson said that in the light of the subsequent and ongoing humanitarian and human rights concerns in Rakhine state, the Secretary-General requested that the Government help establish a strong presence of the UN and other international NGOs.

Given the heightened tensions and anxieties among various communities in Rakhine with regard to the nationwide census, the Secretary-General also underlined the importance for this critical exercise to be undertaken in a peaceful and, above all, credible manner.

He hoped that the conduct of the census in Rakhine and elsewhere in the country will meet established international technical and human rights standards.

Mr. Ban also reiterated the UN’s commitment to provide continued support to the national reform efforts underway in the South-east Asian nation following the establishment of a new Government two years ago. 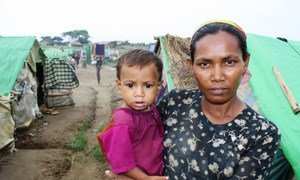 Voicing concern about attacks this week on United Nations and non-governmental organization premises in Sittwe in Myanmar’s Rakhine state by unidentified groups of demonstrators, a senior UN official called on authorities to ensure the safety of aid workers there.