With more than 15 years of United Nations peace operations in Sierra Leone set to wrap up at the end of this month, the top UN official there said today that while the West African nation has gained solid footing on the path to recovery, it will still require sustained international attention and support to address the lingering challenges from a brutal civil war in the 1990s.

“The general atmosphere of peace that now prevails is the culmination of more than 15 years of successive Security Council-mandated peace operations in the country,” said Jens Anders Toyberg-Frandzen, delivering his final briefing to the Council on the work of the UN Integrated Peacebuilding Office in Sierra Leone (UNIPSIL), which he heads.

He also praised the determination of the people and Government to break with the past and work towards a peaceful, democratic and prosperous nation. Sierra Leone had also benefited from “a remarkable level of steady engagement of the UN and international partners, demonstrating that concerted international action can yield positive results,” he said, noting that UNIPSIL was created in 2008, succeeding a peacekeeping mission that opened in 1999.

Yet, though the country is continuing on the right path, it still faces a number of challenges linked to the root causes of its decade-long civil war that require sustained attention and support, Mr. Toyberg-Frandzen said, emphasizing the work ahead for Sierra Leone in addressing pervasive poverty and unemployment, especially among the youth, as well as endemic corruption, in addition to upholding the rule of law and widening the political space.

“Addressing the remaining challenges requires the joint efforts of all Sierra Leoneans to work together and to place the national interest above all other interests,” he said, noting that during Secretary-General Ban Ki-moon’s visit to Sierra Leone earlier this month for a special ceremony to honour the country and UNIPSIL, it had been heartening to hear all the major political parties speaking with one voice in a joint statement in which they committed to work towards a peaceful future for Sierra Leone.

As for the road ahead, he explained that UNIPSIL would transfer its responsibilities to the UN Country Team, which consists of 19 agencies, funds and programmes based on the UN Development Assistance Framework, known as UNDAF, and in support of the Government’s “Agenda for Prosperity,” a social and economic development strategy for 2013-2018.

“I urge Sierra Leone’s development partners to remain engaged and consolidate the many investments made over the years, including through support for the Agenda for Prosperity and the [UNDAF],” said Mr. Toyberg-Frandzen, adding that increasing state revenue will also be crucial. He also commended President Koroma for his “zero tolerance” approach to corruption, an important step towards improving the business climate and attracting investors with strong responsible business practices.

Also briefing the Council today, Guillermo E. Rishchynski of Canada, Chair of the UN Peacebuilding Commission’s Sierra Leone Configuration, hailed the country’s achievements as “tremendous” as it transitions from the special attention due post-conflict countries to a more traditional development footing.

“It is also worth pausing a moment to reflect on the speed of this transformation. Fourteen years ago the country hosted the world's largest peacekeeping mission,” he said, adding that at a time when much policy attention is focused on managing periods of transition, Sierra Leone stands as an example of what is possible, with successively smaller peace operations successfully giving way to an integrated peacebuilding office and now a UN Country Team.

“While UNIPSIL's withdrawal should be properly celebrated, it should also not be mistaken for an endpoint. Despite such significant progress, Sierra Leone will continue to face a series of challenges. The root causes of the original conflict cannot be fully addressed in little more than a decade,” cautioned Mr. Rishchynski, noting further that the country needs sustained support because too often, the international community has failed to adequately persevere for the full duration of peace consolidation efforts.

For its part, the Peacebuilding Commission's engagement with Sierra Leone will continue over the course of the coming year, albeit in a significantly scaled down form. He said that this role will be “lighter” than the current mode of engagement, with the emphasis on serving as an advocate with the international community and responding to needs as they arise by mobilizing international attention.

“Recognizing that this new role is precedent-setting for the Peacebuilding Commission, I also intend to conduct a light stocktaking exercise in approximately one year, with a view to Sierra Leone's exit from the Commission's agenda if appropriate at that time,” he concluded.

The Council capped the passage of the situation in Sierra Leone from its formal agenda with the adoption of a Presidential Statement welcoming the considerable progress the country has made in strengthening institutional and human resources capacities of State institutions, including in the security, justice and governance sectors. The Council also recognized the important contribution of UNIPSIL in promoting peace, stability and development.

“The Security Council underscores the importance of continued support to Sierra Leone as it embarks on the next stage of its development, beyond UNIPSIL, including the constitutional review process, and notes the willingness of the United Nations and bilateral and multilateral partners to continue, as requested by the Sierra Leonean authorities, to play a significant role in this regard,” said the statement. 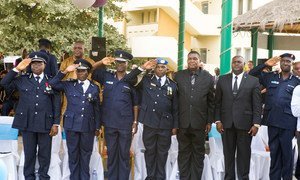 Inclusivity, institution-building and international/regional support are the three key ingredients to long-lasting post-conflict peace, United Nations officials said this morning as they called on the Security Council to help shape a more effective UN peacebuilding architecture.