UNFF/Riccardo Gangle
Grace works on a voluntary basis to support efforts to protect the forest. She provides both material support to Kenya Forest Service rangers.

21 March 2014
United Nations officials today called on countries to scale up efforts and resources devoted to forests, which provide countless economic and social benefits, as well as being essential to combating climate change.

“Forests are the lungs of our planet,” Secretary-General Ban Ki-moon stated in his message for the second annual International Day of Forests, observed on 21 March. “

They cover one-third of all land area, and are home to 80 per cent of terrestrial biodiversity. They are crucial for addressing a multitude of sustainable development imperatives, from poverty eradication to food security, from mitigating and adapting to climate change to reducing disaster risk.”

Around 1.6 billion people – including more than 2,000 indigenous cultures – depend on forests for their livelihood. Forests also help combat climate change as they store more carbon than is in the atmosphere.

In 2012, the UN General Assembly proclaimed 21 March as the International Day of Forests to celebrate and raise awareness of the importance of all types of forests, and encouraged countries to organize activities involving forests and trees, such as tree-planting campaigns.

“This day marks a worldwide commemoration to celebrate our forests and to raise awareness of the importance of protecting our essential global ecosystems,” General Assembly President John Ashe said in his message.

As countries work to create a future global development agenda, he urged them to recognize the ecological, economic, social and health benefits of the world’s forests, noting that in recent years, global deforestation has spread at an “alarming” rate.

Over 13 million hectares of forest are destroyed each year and deforestation accounts for 12 to 20 per cent of the global greenhouse gas emissions that contribute to global warming.

Indeed, new data released on the occasion of the International Day by the UN Food and Agriculture Organization (FAO) confirm that forest areas continue to decline globally, with the biggest losses of tropical forests occurring in South America and Africa.

Improving information on forest resources is a key factor in halting illegal deforestation and forest degradation, said FAO, which is using this year’s Day to discuss ways to improve the availability of information on the state of forests at all levels: nationally, regionally and globally.

“If we want to be serious about halting deforestation, in line with FAO’s Zero Illegal Deforestation challenge, this must be premised on the availability of sound information and data,” said FAO Director-General Jose Graziano da Silva.

Activities to mark the Day this year includes tree-planting and other community-level events, and national celebrations including art, photo and film as well as social media.

An event held at UN Headquarters in New York brought together thought leaders, Forest Heroes and filmmakers to spotlight the role of women as agents of change for forests and sustainable development.

Forest Hero Rhiannon Tomtishen said that it was from the example set by her hero and environmental activist Jane Goodall that she learned the three most important characteristics of being a change-maker: passion, dedication and perseverance.

In 2007, as 11 year olds, Ms. Tomtishen and fellow Forest Hero Madison Vorva launched campaigns calling for the Girl Scout organization to remove palm oil – the cultivation of which is linked to rainforest deforestation – from their cookies.

“This project has been a major part of our lives for the past seven years,” noted Ms. Vorva. “And we’ve grown from shy girls to confident and capable young women. As we grow up, the direction of our work will continue to grow with us.

“Ironically, Girl Scouting taught us to serve others, so our story began by questioning the use of unsustainable palm oil in Girl Scout cookies in an effort to save orang-utans. Having grown from this experience, an opportunity exists for us to approach our activism from new perspectives.”

“Those passionate about forest conservation,” added Ms. Tomtishen, “need to continue to speak out about the palm oil crisis until 100 per cent of the world’s palm oil is grown under deforestation-free regulations.”

Award-winning documentary filmmaker Rosa Rodgers said that women play a vital role in protecting the environment. “But it’s a role that quite often goes unrecognized.”

Her film “The Water Forest” is about the campaign by a group of activists in Senegal working to replant and preserve the fast disappearing mangrove forest. She noted that while the most visible activists were men, it was women who went out every day to work in the mangroves, often taking their children with them. “It’s only when women really understand the importance of the mangroves and the importance of protecting them that change can really begin to happen.”

Delivering a keynote address at the event, Susana Malcorra, Secretary-General Ban Ki-moon’s Chef de Cabinet, said that despite some progress, women are often excluded from the decision-making process related to the sustainable management of forests. “Women’s contributions to forest management are largely in the form of informal, unpaid work. And so their share of the benefits is not proportionate to their contribution,” she noted.

“Only by empowering women, and in particular rural women, can we fulfil their potential as critical agents of change and drivers of sustainable development. Sustainable forest management will also benefit from empowering women.” 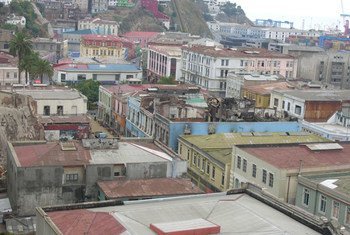 15 April 2014
The head of the United Nations Educational, Scientific and Cultural Organization (UNESCO) today voiced deep concern over the destruction caused by fires that have been raging around Valparaíso and pledged to help safeguard the Chilean city’s historic sites.