“We meet at a time of fundamental re-orientation of global development efforts,” said Wu Hongbo, Under-Secretary-General for UN Economic and Social Affairs, opening the two-day Development Cooperation Forum (DCF) High-Level Symposium, on the topic “Accountable and effective development cooperation in a post-2015 era.”

“The intrinsic linkage between poverty reduction and sustainable development must guide the design of a post-2015 development agenda that is both unified and universal,” he stressed, adding that putting such a transformative agenda into place requires “robust monitoring and accountability.”

The United Nations at all levels is engaged in establishing a global agenda that will transition from the landmark Millennium Development Goals (MDGs), agreed by world leaders at a UN summit in 2000, aiming to slash extreme hunger and poverty, cut maternal and infant mortality, combat disease and provide access to universal education and health care, all by the end of 2015.

Despite significant progress in some areas, these targets will not be reached in many countries, and this “unfinished business” will be incorporated in an even more ambitious post-2015 agenda.

Building on the key findings from the first two high-level events in Ethiopia and Switzerland, and a policy dialogue in Vienna, ECOSOSC's 2014 expert Symposium – along with UN Department of Economic and Social Affairs and the Government of Germany – has invited more than 170 experts from Governments, civil society, the private sector and other stakeholders to discuss in Berlin accountability, best practices, and major obstacles to global sustainable development partnerships beyond 2015.

“The aim is not a one-size-fits all architecture for development cooperation and its monitoring. It is to allow the diverse group of actors and approaches to flourish side by side and to lead to partnerships in line with agreed global commitments,” explained Mr. Wu.

In his opening address, Mr. Wu highlighted four key conditions that would help achieve accountability in the global architecture of development cooperation: knowledge and progress sharing among all actors, integration in the broader post-2015 development agenda to ensure policy coherence, incentives for Member States to report on the progress made, and implementation of systems and technology so as not to overburden already stretched development cooperation teams on the ground.

For his part, ECOSOC President Martin Sajdik ">focused his remarks on expectations for the 2014 Forum and beyond. The 2014 DCF, he noted, would tackle how to ensure development cooperation is fit for purpose in the post-2015 era.

“The DCF can help ensure that all views are being heard”, he said, and the Symposium would demonstrate how the DCF serves as a vibrant forum for exchange among all development partners on an equal footing.”

The conclusions drawn from the deliberations of the Symposium will also inform the discussions at the first ministerial meeting of the Busan Global Partnership for Effective Development Cooperation, which is to take place in Mexico in April this year. The DCF Germany Symposium will serve as the third and last key preparatory event for the 2014 Development Cooperation Forum of ECOSOC held at UN Headquarters this coming July. 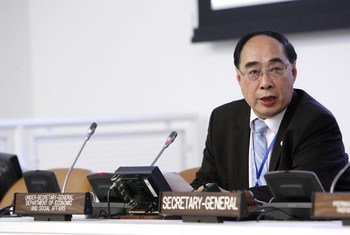 11 February 2014
Against the backdrop of a weak global economic recovery and harsh fiscal austerity measures, continued unemployment and an aging world population, the United Nations and its partners must lead efforts to put people’s needs at the forefront of development.