The Security Council today unanimously adopted a resolution condemning attempts to illicitly export crude oil from Libya and imposing sanctions on vessels involved in such efforts.

The resolution requested that Libya inform the Security Council committee overseeing the arms embargo, travel ban and assets freeze imposed on the country by resolution 1970 – known as the 1970 committee – of any vessels transporting crude oil illicitly exported from Libya.

It also decided that the 1970 committee would designate those vessels for some or all measures authorized in the resolution on a case-by-case basis for a period of 90 days.

These include actions by Member States to prohibit the vessels from entering ports and requiring their nationals not to engage in any financial transactions with respect to crude oil from Libya aboard vessels designated by the committee.

The measures also require the flag State of the designated vessel to take the necessary measures “to direct the vessel not to load, transport or discharge such crude oil from Libya.”

Further, the resolution authorizes Member States to inspect on the high seas vessels designated by the committee, and to use all measures “commensurate to the specific circumstances” to carry out such inspections and direct the vessel to take appropriate actions to return the crude oil to Libya.

Earlier this month, the “Morning Glory,” a Democratic People’s Republic of Korea (DPRK)-flagged vessel, reportedly loaded crude oil belonging to a joint venture between the Libyan National Oil Company and some United States companies at the rebel-held port of Sidra in eastern Libya.

The vessel, reportedly carrying an estimated $20 million in cargo, was later seized by the US Navy in international waters off the coast of Cyprus at the request of both Libya and Cyprus. 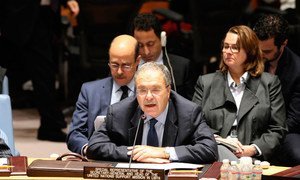 The Security Council today extended for another year the United Nations mission assisting Libya, as preparations in the North African country turn to upcoming parliamentary elections due to be held in June.