AU/UN/IST/Mahamud Hassan
African Union troops guard a bridge over the Juba river near the town of Burdubow which they regained control of from Al Shabaab insurgents on 9 March 2014 during a joint operation with Somali National Army troops.

19 March 2014
The United Nations envoy for Somalia, Nicholas Kay, has welcomed progress made by the national army and the African Union peacekeeping mission in regaining control of key towns from Al Shabaab insurgents.

He added that the UN will continue support the joint operations, and stressed the importance of ensuring that international humanitarian law and human rights are fully respected during these operations.

The SNA and AMISOM have been pursuing a renewed offensive against Al Shabaab insurgents, who in 2011 were forced to retreat from the capital, Mogadishu.

In a briefing to the Security Council last week, Mr. Kay, the Secretary-General’s Special Representative for Somalia, noted that the new offensive is “the most significant and geographically extensive military advance” since AMISOM was created in 2007.

In a statement issued to the press today, the Council strongly condemned Tuesday’s attack on a hotel in Bula Burde, for which Al Shabaab has claimed responsibility and has caused numerous deaths and injuries. The victims included members of the SNA, AMISOM and civilians.

“The members of the Security Council paid tribute to the Somalia National Army and AMISOM for the efforts and sacrifices they are making in the fight for a stable and peaceful Somalia,” the 15-member body said.

Noting that fighting has affected civilian populations, Mr. Kay said today that the UN and international partners have begun addressing humanitarian needs where access is possible and needs are assessed.

“Somalis living in areas now under Government control should quickly receive what they need: better security and justice, services such as health and education and a decent livelihood.”

He welcomed contributions made by international partners to the Government’s efforts to ensure Somalis benefit from peace and stability, and called for more international support.

“This is a turning point in Somalia’s struggle to bring lasting peace to all its people. Its friends and partners need to act quickly and generously.”

He added that the UN is supporting the stabilization efforts, including by immediately making available $3 million from its Peacebuilding Fund, which provides financing to jump-start rebuilding projects in countries emerging from conflict.

After decades of factional fighting, new Somali national institutions emerged in 2012, as the country ended a transitional phase toward setting up a permanent, democratically-elected Government. 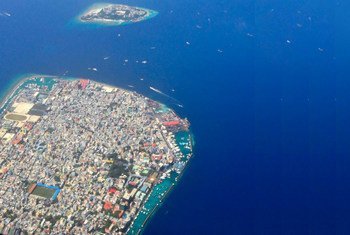 10 March 2014
United Nations Secretary-General today expressed concern about the situation in the Maldives following the decision of the Supreme Court to remove the Chair and the Vice Chair of the Elections Commission and to sentence the Chair for contempt of court.