13 March 2014
The United Nations continued efforts on multiple fronts to de-escalate tensions in Ukraine, with a senior human rights official holding meetings today in the capital, Kiev, while in New York, the Security Council held its sixth urgent session on the crisis, hearing the UN political chief stress that the path to a peaceful resolution is still open – “let us seize it.”

The Permanent Mission of Ukraine to the UN requested the Council to convene urgently “due to the deterioration of the situation in the Autonomous Republic of the Crimea, Ukraine, which threatens the territorial integrity of Ukraine.”

Chairing the meeting was Jean Asselborn, Minister of Foreign and European Affairs of Luxembourg, which holds the Council's presidency for the month. The session was briefed by Jeffrey Feltman, UN Under-Secretary-General for Political Affairs and also heard a statement from Ukrainian Prime Minister Arseniy Yatsenyuk.

The meeting came as senior UN officials have been appealing to all parties for weeks to de-escalate tensions and to engage in direct and constructive dialogue to forge a peaceful way forward in Ukraine, which has been witnessing unrest for several months.

In his briefing, Mr. Feltman noted that this is the sixth time the Security Council has met on the situation in Ukraine since 1 March, even as multiple multilateral and bilateral diplomatic efforts remain under way, “all aimed at seeking a peaceful resolution of the crisis.”

Yet, the frequency of the deliberations is also a reflection of the fact that as an international community “we have not yet been able to deliver on our obligation…to contribute to the de-escalation of tensions in accordance with the provisions of the UN Charter,” he said.

Mr. Feltman said Secretary-General Ban Ki-moon’s concern continues to deepen regarding the deterioration of the situation in Crimea and rising tensions in eastern Ukraine. In Crimea, the seizure and blockade of Ukrainian military bases, as well as of the majority of State Border Service facilities continues.

“There have been reports that a military hospital has been taken over by unidentified military personnel,” he said, noting other reports that Crimean authorities closed the airspace over the peninsula to all commercial flights except those travelling to and from Moscow, citing the need to keep ‘provocateurs’ out of the area.

“The scheduled referendum has further complicated an already difficult and volatile situation,” Mr. Feltman continued, saying that he regretted to report that local authorities have denied UN Assistant Secretary-General for Human Rights, Ivan Šimonovic, access to Crimea, citing the lack of readiness to receive him and inability to provide security.

As for the situation on the ground “we will have to rely on, among others, reports from residents, foreign diplomats based in Crimea, and international non-governmental organizations,” with whom Mr. Šimonovic has been in contact. “Given the vast divergence in reports about what is actually happening on the ground in Crimea, we would have much preferred that [Mr. Šimonovic] had been able to collect first-hand accounts himself.”

He went on to say that the monitoring mission established by the Office for the UN High Commissioner for Human Rights (OHCHR) is set to become operational in Ukraine by Monday, and, in light of the “unpredictable situation, which could affect human rights”, the Secretary-General has asked Mr. Šimonovic to extend his mission in the country.

“In the highly charged atmosphere in Ukraine, exacerbated by the lack of trust and by fear, the potential for intentional or unintentional escalation or miscalculations is very real,” he said, reiterating the Secretary-General’s recent calls for resolving the crisis in a manner that respects Ukraine’s territorial integrity and which paves the way for constructive, rhetoric-free dialogue.

“All sides must avoid unilateral actions that could further raise tensions and make de-escalation difficult. It is high time for constructive engagement – instability in Ukraine is in no one’s interest and will have dire consequences for the region and the world,” said Mr. Feltman, emphasizing that the United Nations is convinced that with genuine concerted efforts by the international community “we can together pull Ukraine back from the brink.”

Later in the day, the Secretary-General’s spokesman issued a readout of a meeting between the UN chief and Ukrainian Prime Minister Yatsenyuk and acting Foreign Minister, Andrii Deshchytsia.

“The Secretary-General expressed his increasing concern about developments in Ukraine, including his particular alarm at the rapidly evolving crisis in Crimea and reports of rising tensions in eastern Ukraine,” said the note.

The Secretary-General underscored that he had intensified diplomatic efforts over the past days and weeks but that all parties must de-escalate the situation, tame the rhetoric and find a peaceful solution to the crisis.

“He urged the Prime Minister and acting Foreign Minister not to relent on their efforts to engage in direct dialogue with Russia and commended their restraint thus far during this difficult time in Ukraine’s history,” said the readout, adding that Mr. Ban stressed the need for the Prime Minister to govern Ukraine in a spirit of inclusivity and to promote a country of unity and opportunity for all, including minorities.

The officials also discussed the ongoing visity of Mr. Šimonovic in Ukraine.

Further to the readout, Mr. Ban underscored that the UN Charter has to be the guiding instrument for collective efforts toward a peaceful solution to the crisis in Ukraine. The Charter’s principles of sovereignty, territorial integrity, peaceful settlement of disputes and full respect for human rights, must prevail.

Meanwhile, according to UN spokesperson Stéphane Dujarric, Mr. Šimonovic continued his mission in Ukraine today, visiting Lviv, a city in the western part of the country, where he met with the head of the regional council and discussed the hosting of displaced people from Crimea now living in the Lviv region. He also held talks with the regional Ombudsperson.

The spokesperson said that Mr. Šimonovic then met with representatives of local non-governmental organizations, including Crimean Tatars, and they discussed the human rights situation in Ukraine.

He also had a meeting with the originator of a grassroots campaign to speak Russian in Lviv for one day in solidarity with Russian speakers in Ukraine alarmed by the decision of the country’s Parliament to repeal the language law.

“Mr. Šimonovic returned to Kiev today, where he will meet with ministers and other officials. He is scheduled to hold a press conference in Kiev tomorrow,” said the spokesperson. 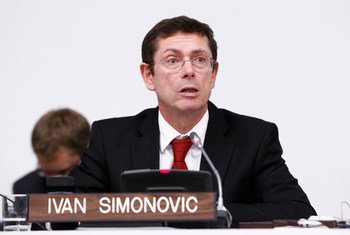 12 March 2014
The United Nations said today that in addition to logistical challenges that hindered Assistant Secretary-General for Human Rights IvanŠimonović from traveling to the autonomous Ukrainian region of Crimea this week, he was informed by authorities that he could not be received there.