UN Women/Jashim Salam
A mother with her child taking a goat for grazing in a mustard field in Dohazari village, Chittagong.

10 March 2014
Women’s human rights have come a long way but there is still much to do and little time to do it in, United Nations Secretary-General Ban Ki-moon said today opening the 2014 session of the Commission on the Status of Women (CSW), which this year will focus on development, particularly education and reproductive rights.

“We cannot achieve a world of dignity for all until we end gender inequality in all its forms,” Mr. Ban told the 58th session of the CSW, underway at UN Headquarters in New York and scheduled to wrap up on 21 March.

More than 6,000 registered representatives of the 193 Member States, UN and non-governmental organizations (NGOs) will discuss the challenges and achievements in the implementation of the eight anti-poverty targets known as the Millennium Development Goals (MDGs) ahead of the 2015 deadline. The final discussion document will contribute to shaping a future development agenda, with some participants pushing for a standalone goal on women’s empowerment in the post-2015 development agenda.

This year’s meeting of the Commission comes ahead of the 20th anniversary of the landmark Fourth World Conference on Women, held in Beijing in 1995. The Beijing Declaration and the Platform for Action, adopted unanimously by 189 countries at the conference, is considered the key global policy document on gender equality, addressing critical areas such as women and poverty, violence against women and the human rights of women.

For the next two weeks, CSW participants will also discuss women and girls’ access to education, training, science and technology, as well as women’s equal access to full employment and decent work.

“More girls are in school, but we are far from ending gender disparity at all levels of education,” the top UN official said, highlighting that gender gaps are particularly stark among rural populations and for persons with disabilities, indigenous peoples, and other marginalized groups.

Mr. Ban said that the UN is also committed to helping Governments provide the education and quality sexual and reproductive health services that too many women and adolescent girls lack.

“Child deaths are dropping significantly, but too many children still die needlessly before the age of five,” he said. “The number of women who die each year from pregnancy and childbirth has dropped by almost half, but too many women still die every day due to pregnancy-related causes.”

The Every Woman Every Child effort, which Mr. Ban launched in 2010, aims to save the lives of 16 million women and children by 2015 by mobilizing Governments, multilaterals, the private sector and civil society to address the major health challenges facing women and children around the world.

Mr. Ban noted the need to provide adequate sanitation and end open defecation, a practice that is linked to one of the greatest current challenges of the MDGs.

More than 2.5 billion people lack the benefits of adequate sanitation, and nearly half of those people practice open defecation, according to UN figures.

Proper sanitary facilities would significantly reduce ill-health and environmental pollution, Mr. Ban said, and also enhance the personal safety of women and girls who are often risk sexual abuse for lack of a safe, clean toilet.

In today’s speech, Mr. Ban also reiterated his calls on men and boys to support the rights of their mothers, sisters and daughters. On the eve of International Women’s Day marked on 8 March, UN Women this year launched the “HeForShe” campaign urging men and boys to take a stand.

“Men and boys have a vital role,” Mr. Ban said, noting that he has established a network of men leaders to speak out against violence as part of the complimentary UNiTE to End Violence Against Women campaign, which works with women and men to raise awareness and change attitudes, customs and practices.

In her remarks, UN Women Executive Director Phumzile Mlambo-Ngcuka said that the MDGs and the Beijing Platform for Action are both about making the lives of women and girls better. “We have to align our post-2015 efforts with this purpose. For more positive outcomes in the future, let us plan the future with greater impact and sustainability in mind.”

She went on to say that the struggle for woman’s empowerment is more than 100 years old and there is a determined intergenerational force that wants to see a sense of urgency and determination on behalf of the world about avoiding the possibility of wasting another generation.

“We can and must do better because equality for women is progress for all! We must make today better than yesterday and tomorrow better than today,” declared Ms. Mlambo-Ngcuka.

The CSW is due to conclude on 21 March. Until then, more than 135 events organized by UN agencies will be held at Headquarters, alongside the official meetings of the Commission. According to UN Women, an additional 300 parallel events will be hosted by the NGO community close to the UN premises.

More needs to be done to ensure gender equality in peacebuilding, Ban warns 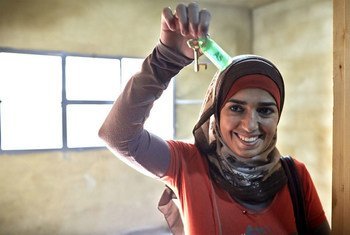 8 March 2014
To mark International Women's Day, the United Nations family is spotlighting a simple truth: achieving equality for women and girls is essential not merely because it is a matter of fairness and fundamental human rights, but because progress in so many other areas depends on it.