UNHCR/A. Greco
Ten-year-old Prophète (left) and his friend Ardi, 7, live on the streets in PK5, one of the last neighborhoods in Bangui, Central African Republic, where Christians and Muslims still live side by side.

28 February 2014
Amid reports of retaliatory killings between armed Christian and Muslim factions the Central African Republic (CAR), a senior United Nations official today warned that “ethno-religious cleansing” is being carried out in the country, and now it is “most important” for mediation among the communities, and for more international forces to be deployed to protect civilians.

“It is still possible for communities to continue to live together, but intensive mediation is necessary for that to happen,” said Philip Leclerc, who is in charge of the protection cluster in CAR for the UN refugee agency (UNHCR).

“What is most important at the moment is that mediation take place in many [areas] across the country,” he said, adding however that if mediation fails, the UN has no other possibility but to evacuate groups to safer places, or secure their safe passage to the north, Cameroon, Democratic Republic of the Congo and Chad where some 288,000 people have taken refuge.

Back from a two-month deployment, Mr. Leclerc said that people were trapped and trying to save their lives amid escalating violence in which Muslims, in particular, were being targeted.

The conflict in CAR erupted when Séléka rebels launched attacks in December 2012 and has taken on increasingly sectarian overtones as mainly Christian militias known as anti-Balaka (anti-machete) have taken up arms.

Thousands of people are believed to have been killed, and 2.2 million, about half the population, need humanitarian aid.

“It is extremely important that international forces be increased so that people [can be] saved,” Mr. Leclerc said at a briefing in Geneva. He noted that the State is increasingly re-exercising its power, and security is also provided as a result of the International Support Mission to the Central African Republic (MISCA) and the French mission, known as Sangaris.

Noting that the violence in CAR reminded him of that which engulfed Gorazde and Srebrenica in 199r, he said that in an extremely dire situation, “people were relying on United Nations forces, and sometimes on protection jut by the mere presence [of those forces].”

“If there are more international forces, there would certainly be fewer human rights violations and fewer reasons for people to flee,” Mr. Leclerc said.

Also on the CAR today, the UN Children’s Fund (UNICEF) confirmed that it had reunited four abducted children with their father.

The two girls and two boys were seized and held ransom by the militia, but released following negotiations. 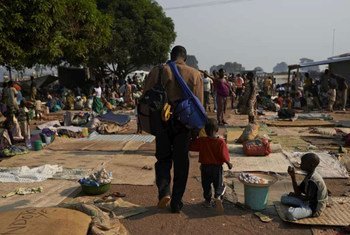 25 February 2014
As the violence across the Central African Republic (CAR) continues unabated, United Nations agencies are sounding the alarm about the plight of civilians at risk inside the country and are now also warning that the crisis threatens to engulf the region, with thousands of people fleeing the fighting to seek refuge in neighbouring countries.